ARROW Reveals New Details On The Return Of The Canary, The Atom, Katana, Ra’s Al Ghul’

We are expecting some big news on CW’s Arrow at Comic Con this week, but we’ve got some great new information on some of the big DC characters who will be returning or making their first appearances next season including: The Canary, The Atom, Katana, and Ra’s Al Ghul’.

IGN caught up with series Executive Producer Andrew Kreisberg and here’s what he had to say:

On the return of Black Canary:
“We have her booked for three episodes, with hopefully more. She has come back to Starling City because she is on a mission… and that is all I can say.”

On Ra’s Al Ghul’:
“You know us — we’re never one to do the logical thing! You know, I can’t comment on that — I can neither confirm nor deny. But rest assured, we have a lot of amazing stuff set up, mythology-wise, this year that will really feel like an extension of everything we’ve done before.”

On the introduction of Brandon Routh as The ATOM:
“I think, in the great tradition of shows when they hit Season 3, we’re bringing on a game-changing character, somebody who’s brought on specifically to shake up all the characters, and we are overjoyed and beyond thrilled that Brandon is willing to come on. First of all, he’s such an amazing guy. Beyond that, he’s just such an amazing actor. One of the things we really wanted to inject more into the show was humor. What’s funny about Oliver and Felicity is that he’s the straight man. She sort of gets all the funny lines. What’s great about having Brandon on the show is Brandon’s an old-time movie star. He’s like Jimmy Stewart. He can play that rat-tat-tat, Preston Sturges, you know, His Girl Friday with Felicity. He’s obviously got the superhero looks and superhero physique, but he has the fun and funny and charm that Grant brings to Barry. Just from what I’ve seen so far in the dailies, we are so grateful that he’s taken another step back into the DC Universe.” 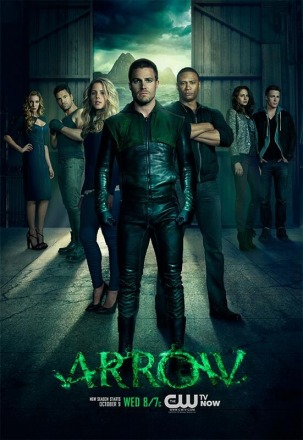