Relive the epic saga from the beginning… 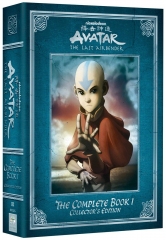 In anticipation of the release of M. Night’s “The Last Airbender” Paramount will release a special collectors edition of “Avatar: The Last Airbender The Complete Book 1.” This new limited edition 7-disc collectors set includes all the original 20 episodes that aired on Nickelodeon in addition to special features such as an exclusive preview book and more.

You can expect this collectors set to hit June 22, 2010. Here’s the complete press release:

Relive the epic saga from the beginning…

This newly designed limited edition 7-disc collector’s set includes the entire Book 1: Water compilation with special features and bonus disc. An amazing behind-the-scenes documentary from the creators Michael Dante DiMartino and Bryan Konietzko that reveals the story behind the creation of the epic animated series including never-before-seen development art, interviews with the creative team, fan testimonials and more.

Also included is an exclusive preview edition of Avatar: The Last Airbender – the Art of the Animated Series, a book that provides a unique, insider’s view of the amazing designs, storyboards, paintings and animation.

About Avatar: The Last Airbender
Water. Earth. Fire. Air. Only the Avatar was the master of all four elements. Only he could stop the ruthless Fire Nation from conquering the world. But when the world needed him most, he disappeared. Until now… On the South Pole, a lone Water Tribe village struggles to survive. It’s here that a young Waterbender named Katara and her warrior brother Sokka rescue a strange boy named Aang from a cavernous iceberg. Not only is Aang an Airbender – a race of people no one has seen in a century – but they soon discover that Aang is also the long lost Avatar. Now it’s up to Katara and Sokka to make sure Aang faces his destiny to save the tribe, and himself. Avatar:The Last Airbender is syndicated in over 80 territories around the world, and is the #1 ranked program with boys 6-11 on Nicktoons in 2Q10-to-date (3/29/10-5/16/10).