“Ultron sees the big picture and he goes, ‘Okay, we need radical change, which will be violent and appalling, in order to make everything better'”

Up to this point, we’ve seen some mocap costumes and some concept art, but thanks to the new cover for Entertainment Weekly, we are now getting our first official look at Ultron from the upcoming Marvel’s Avengers: Age of Ultron!

Thanks to the article, we also now now that Tony Stark creates Ultron, in this version of the story, as a way to keep his promise to himself at the end of Iron Man 3 and step back from putting on the armor.

Here’s what Joss Whedon had to say about the character:

Ultron (played by James Spader through performance-capture technology) lacks the human touch, and his superior intellect quickly determines that life on Earth would go a lot smoother if he just got rid of Public Enemy No. 1: Human beings. “Ultron sees the big picture and he goes, ‘Okay, we need radical change, which will be violent and appalling, in order to make everything better’; he’s not just going ‘Muhaha, soon I’ll rule!’” Whedon says, rubbing his hands together. “He’s on a mission,” the filmmaker adds, and smiles thinly. “He wants to save us.” 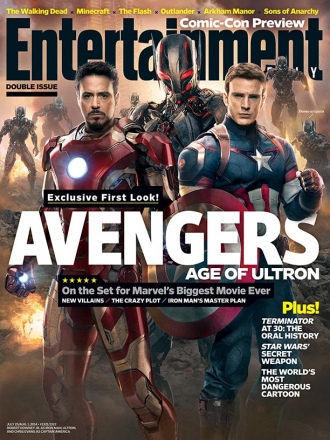