There’s not much I can add to the awesomeness of this announcement, so I’m going to just shut up and let you read about one of the coolest DVD collector’s sets that we’ve ever seen for a TV show. 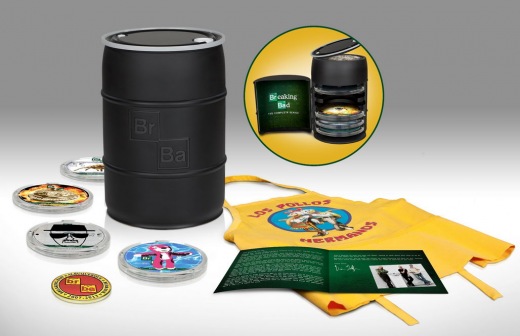 CULVER CITY, CALIF. (September 9, 2013) – Sony Pictures Home Entertainment cooks up a full batch on
Nov. 26 when BREAKING BAD: THE COMPLETE SERIES comes to Blu-ray™ in its entirety. One of the most explosive series ever to air on television, the 16-disc set is this year’s must-have gift for the holiday season, complete with all 62 episodes and more than 55 hours of special features. Starring three-time Emmy® winner Bryan Cranston (Outstanding Lead Actor in a Drama Series) alongside two-time Emmy® winner Aaron Paul (Outstanding Supporting Actor in a Drama Series), the critically acclaimed drama from Sony Pictures Television boasts one of television’s most radical storylines, giving viewers a glimpse into the life of how far a man might go in order to take care of the ones he loves. “Bryan Cranston is still turning in a transformative, unimpeachable performance as Walt, who remains one of the greatest dramatic creations ever to grace our TV screens,” hails USA Today’s Robert Bianco.

Fans who are addicted to the series and itching for another hit can now indulge in more than two-hours of never-before-seen footage in a ground-breaking series documentary exclusively in the box set, which comes packaged in a collectible replica barrel representing part of Walter White’s dark legacy. The all-new documentary chronicles the making of the final season, from filming the first table read to the very last day on set and everything in between, including Bryan Cranston inviting the camera in to his Albuquerque living room for the first reading of the final script with Aaron Paul. The box set also contains all bonus features from previously released seasons (including retail exclusives formerly only available in select stores), a Los Pollos Hermanos apron and a collectible booklet with a letter from Gilligan, as well as a commemorative Breaking Bad challenge coin designed and created by Gilligan exclusively for this set as a token of appreciation to fans for making the Breaking Bad journey.

breaking-bad-series-blu-raySynopsis:
BREAKING BAD follows protagonist Walter White (Cranston), a chemistry teacher who lives in New Mexico with his wife (Gunn) and teenage son (Mitte) who has cerebral palsy. White is diagnosed with Stage III cancer and given a slim chance to survive. With a new sense of fearlessness based on his medical prognosis, and a desire to secure his family’s financial security, White chooses to enter a dangerous world of drugs and crime and ascends to power in this world. The series explores how this fatal diagnosis transforms Walt from mild family man to a kingpin of the drug trade.

No Half Measures: Creating the Final Season of Breaking Bad – An all-new, exclusive two hour documentary that chronicles the filming of the final eight episodes.
Additional bonus features include all previously released featurettes and retail exclusives:

Bad Memories – Bryan Cranston and Aaron Paul talk about the show ending and some of their favorite moments.
Bryan Cranston: Director – Go on set with Bryan Cranston as he directs the first episode of the season entitled “Blood Money.”
Scene Envy – The Cast tell us which scene they wish they could have been in.
Shocking Moments – The stars reveal the moments that shocked them most.
From Walt to Heisenberg – From high school teacher to deadly meth dealer, watch as Walter White quickly transforms into Heisenberg.
How Will It End? – At the beginning of the season, the cast was asked to give their thoughts on how they thought the show would end.
Avenging Agent: Dean Norris as Hank Schrader — A look at the character Hank Schrader and the man who played him, Dean Norris.
Scene Stealer: Betsy Brandt as Marie Schrader – A look at the character Marie Schrader and the woman who plays her, Betsy Brandt.
A Criminal Attorney: Bob Odenkirk as Saul Goodman –A look at the character Saul Goodman and the man who played him, Bob Odenkirk.
Jesse’s Journey: Aaron Paul as Jesse Pinkman – A look at the character Jesse Pinkman and the man who played him, Aaron Paul.
Skyler Breaks Bad: Anna Gunn on Season Four – Actress Anna Gunn and series creator Vince Gilligan explore Skyler’s character evolution through the fourth season.
Growing Up in the White House: RJ Mitte on Walter, Jr. – RJ Mitte, Anna Gunn, Bryan Cranston and series creator Vince Gilligan discuss the extraordinary dynamics of the White family, and Walter, Jr.’s unique role.
The Ultimate Chess Match – Members of the cast and crew discuss Walter White and Gus Fring’s extraordinary and complicated battle of wits and their struggle for Jesse’s allegiance.
Looking Back: A Season Four Retrospective – Season Four’s most surprising and memorable moments.
Ted’s Wipeout – In Episode 411, “Crawl Space,” Ted Beneke suffers a head injury while trying to escape from Saul’s goons. In this featurette, Christopher Cousins (Ted) explains how this shocking stunt was accomplished.
The Truck Attack Storyboard Comparison – A side-by-side comparison of the Los Pollos Hermanos truck attack and the brilliant shot-by-shot storyboards that were created for the episode “Bullet Points.”
Walt and the Challenger Storyboard Comparison – A side-by-side comparison of the sequence where Walt indulges in some crazy stunt driving in Walt Jr.’s Dodge Challenger and the storyboards that were created.
In addition to releasing the complete set on Blu-ray, SPHE will release BREAKING BAD: THE FINAL SEASON on both Blu-ray and DVD with UltraViolet™ on Nov. 26. The final season includes the series’ final eight episodes and is loaded with special features, including all-new featurettes, cast and crew commentaries, deleted scenes and more. Episodes include: Blood Money, Buried, Confessions, Rabid Dog, To’hajiilee, Ozymandias, GraniteState and Felina.

Cast and Crew Commentaries on Every Episode
4 Featurettes
The Main Event
The Final Showdown
Life of a Show Runner
Behind-the-Scenes of the Alternate Ending
Alternate Ending – A 3-minute alternate version of how Breaking Bad could have ended.
Deleted & Extended Scenes
Gag Reel
Walt’s Confession
The Layers of a Sound Mix
Over 15 Episodes of Inside Breaking Bad
Uncensored and Extended Episodes
Broadcast Year: 2013 (AMC)

BREAKING BAD: THE COMPLETE SERIES has a run time of approximately 2,949 minutes and is not rated.

BREAKING BAD: THE FINAL SEASON has a run time of approximately 390 minutes and is not rated.