Marvel joined Disney this year at D23 and present was the entire cast for Marvel Studio’s upcoming film, “The Avengers.” 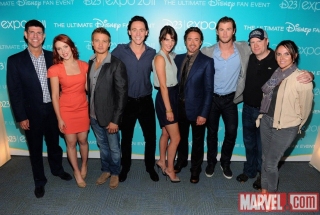 Marvel joined Disney this year at D23 and present was the entire cast for Marvel Studio’s upcoming film, “The Avengers.” Tom Hiddleston, Robert Downey Jr., Scarlett Johansson, Chris Hemsworth, Jeremy Renner and Cobie Smulders were all present at the panel. After some introductions fans were shown an assortment of scenes and quick cut of clips from the new film. Here’s a description of what was shown:

The footage began with Loki (Tom Hiddleston) in prison on board the S.H.I.E.L.D. helicarrier. Nick Fury (Samuel L. Jackson) addresses Loki through the clear panels of the cage: “In case it’s unclear, if you try to escape, you so much as tap on the glass…” Fury then flicks a switch and the floor of the cage almost completely drops away, revealing a 30,000 foot drop to certain doom (or as certain as doom can be with someone like Loki).

Loki simply observes, “It’s an impressive cage”, and he notes that it was clearly built for someone else. Fury says that it was – it was built for someone even stronger than him. Loki knows they’re talking about the Hulk, calling him a mindless beast and wondering how desperate Fury must be to ally himself with the likes of such a creature. At this point we see all the various personnel who are listening into this conversation, including Hulk’s human alter ego Bruce Banner (Mark Ruffalo), Black Widow (Scarlett Johansson), Thor (Chris Hemsworth), Captain America (Chris Evans), Hawkeye (Jeremy Renner), and S.H.I.E.L.D. agent Maria Hill (Cobie Smulders).

Loki wonders what it must feel for Fury to have been so close to wielding the power of the Cosmic Cube, and how devastating it must be for all that to have slipped away. Fury accuses Loki of talking about peace and then killing for fun, and he tells Loki, “You have made me very desperate. You might not be glad that you did.” Loki asks him what it must be like to be in the presence of real power – to which Fury simply replies, “Let me know if real power wants a magazine or something”, and walks away from the cage. The Avengers look at the prisoner on the video monitors, as Bruce Banner caustically observes, “He really grows on you, doesn’t he?”

The footage then shows a bunch of action sequences, including a fighter jet flying over a city, an explosive truck chase, and – most intriguingly – a shot of Captain America and Thor apparently fighting each other, with Thor about to bring the hammer down on Cap’s shield. All the while, we hear Nick Fury explain the mission statement of the Avengers: “There was an idea to bring together a group of remarkable, to see if they could become more. To fight the battles we never could.”

But the most epic exchange comes at the end, as Tony Stark (Robert Downey, Jr.) is behind a bar counter, mixing himself a drink. He describes his teammates: “Let’s do a head count. We’ve got a couple master assassins, a demigod, and a living legend who kinda lives up to the legend” – that’d be Black Widow and Hawkeye, Thor, and Captain America. It’s then that we learn Stark is talking to Loki: “And you, big fella, have managed to piss off every single one of them.”

To this, Loki responds, “I have an army.” Stark’s eminently quotable and awesome response? “We have a Hulk.” We then see the Hulk roar, and the footage ends. While it’s still early days – indeed, filming is still two weeks from completion – this is looking very, very good so far.

Kevin Feige, the President of production of Marvel Studio said that they are still filming in Cleveland but it’ll wrap in about two weeks.

No new news was available.