There’s been talk that Willis would be taking the role of the original GI Joe, Joe Colton. Nothing has been officially confirmed, until today, sort of…

Gone are the days of the press releases and major news breaking in magazines. Now, when a movie star like Bruce Willis lands a role in a major motion picture, we can turn to Dwayne “The Rock” Johnson for the news via his Twitter account.

There’s been a lot of news recently about the upcoming GI Joe sequel ‘GI Joe: Retaliation”. Everything from who is coming back to the new director and the addition of actors like Johnson who will be playing Roadblock.

Earlier today, Johnson took to Twitter from the set of the film to make this statement:

“Welcome brother Bruce Willis to the cast of GI Joe! What an honor.”

It has been talked about for a while now that Willis would be taking the role of the original GI Joe, Joe Colton. Nothing has been officially confirmed, but if The Rock says it is so… I’m not going to argue with him. 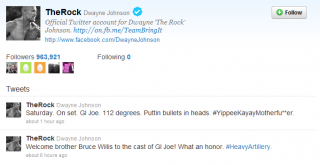