First On Set Images of Michael Shannon as Zod In ‘Superman: Man of Steel’

OK.. so I guess it is kind of a cop out that it isn’t so much a costume as it is a mo-cap suit. That actually raises a lot more questions than it answers.

At first glance, the picture that was just released by the ‘Superman Man of Steel’ official Facebook page looks like it might just be an extra image from the photos we’ve been seeing of the Avengers film set. That’s because this first image of Michael Shannon as Zod, Superman’s alien nemesis in the upcoming Zak Snyder hero flick, is wearing the same kind of motion capture suit that the actors playing Skrulls are wearing in the Avengers footage.

This actually raises a lot of questions. The images that have come out of Cavill as Superman have him in a practical costume. What is so awesome about Zod that he has to be CGI? All my recollections of Zod have him in more practical, military type wear… or that weird jumpsuit from Superman 2.

Unfortunately, we aren’t going to get that answer from the set images. We’ll have to wait until they tease us with some post production shots or concept art images. 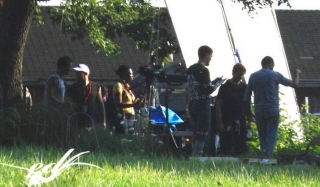