Axe Cop is not only the first hit comic created by a five-year-old, but it is now the first show to get an episode order for FOX’s new late night animation block!

A few months ago, FOX announced that they would be expanding their hold on Network animation with the start of a late night Animation Domination HD block, which will run from 11 PM-12:30 AM Saturday night starting in early 2013. The current order calls for six, fifteen minute episodes. This is one of the 6 new series that they plan to introduce in the first year of the new show. Additionally, they plan to introduce 50 short toons that range from 1-3 minutes each.

For those of you who aren’t familiar with Axe Cop, it was created by five-year-old Malachai Nicolle, His grown brother did the art. It is the tale of an “axe-wielding police officer and his loyal team of allies as they fight bad guys. The first five installments of Axe Cop were put online on January 25, 2010 and went viral in a matter of days.” 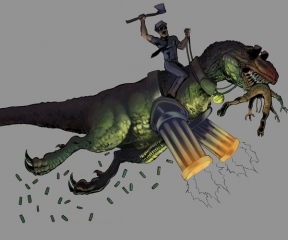