Check out these great photos of the Batsignal shining brightly in the skies of Pittsburgh PA.

We have known for a while that Batman The Dark Knight Rises was filming in Pittsburgh. We even got to see some pictures of the Tumbler. Now we are getting a great look of the Batsignal shining brightly on the Highmark building in downtown Pittsburgh.

It probably won’t be the last time either. They will be filming the movie in Pittsburgh for the next month and they are even for about a month. and they are even filming a major action sequence on August 6th that you can be a part of if you live in the area.

For now we’ll just have to settle for these pics. 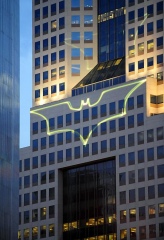