Batman is returning with an all new CG animated series in 2013 called “Beware the Batman.” 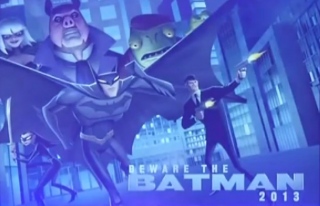 Batman is returning with an all new CG animated series in 2013 called “Beware the Batman.”

According to Register, the new animated series will spotlight a “classic-looking Batman teaming up with a gun-toting Alfred Pennyworth and a female ninja sidekick.”

Executive-produced by Glen Murakami, “Beware the Batman” will “explore the mythology’s more obscure villains, such as Professor Pyg, but also won’t shy away from featuring some of the more well-known Batman foes. In the series, Batman will team up with a younger female sidekick named Katana. During the keynote, Register added that Katana will fill the sidekick role, but won’t be a replacement for Robin.”

From the description and teaser image I’m not sure if I am thrilled about this yet. It makes sense that WB would want to go in a new direction with Batman considering just about every good Batman story has been done. But my heart will always belong to Bruce Timm’s 90s Batman: The Animated Series.” To me, nothing will be able to replace or 1-up this series, unless you count the “Justice League.”

Aside from “Beware the Batman,” Register also revealed that Aardman Animation is creating a new series of claymation Batman shorts for the upcoming DC Nation block, as well as a series of animated shorts called “Super Best Friends Forever,” which will bring together Wonder Girl, Batgirl and Supergirl.

DC Nation, will debut in Spring 2012 with “Young Justice” and “Green Lantern: The Animated Series,” and Doom Patrol animated shorts.