Just what we needed, another great movie made within the last twenty years being remade because somebody thinks they can do it better… 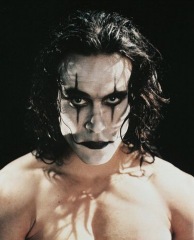 Stephen Norrington, the man who directed Blade 1, and The league of Extraordinary Gentlemen, has signed on to write a reboot of the goth cult franchise, The Crow.

Apparently working on Blade wasn’t the carnival you might think. He recently told Variety that the film left him feeling “demoralized.” Since then he’s spend a great deal of time on his own art and on some projects that didn’t take off for him, like his pitch for the Clash of the Titans Remake.

Do we really need a remake of the Crow? I don’t think so. The first one was pretty damned awesome. I just saw it on TV again the other night. Brandon Lee was great. His death was a huge loss. Also, Alex Proyas, who directed the original and one of my favorite movies, Dark City, did a beautiful job on the film.

All that said, Norrington says he’s got a “completely new take on the character.”