GUILLERMO DEL TORO CABINET OF CURIOSTIES: My Notebooks, Collections, and Other Obsessions is a lavishly illustrated book that is an intimate look into one of the most imaginative minds of this century.

As you probably know, if you’ve been reading Youbentmywookie for a while, we love just about everything that has anything to do with Guillermo Del Toro. Well, we just got this press release in a couple hours ago about his upcoming book, Cabinet of Curiosities “My Notebooks, Collections, and Other Obsessions.”

Check out all the details below: 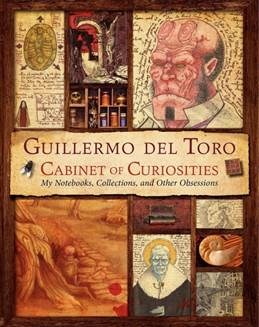 GUILLERMO DEL TORO CABINET OF CURIOSITIES
My Notebooks, Collections, and Other Obsessions

October 4, 2013 (New York, NY) – For more than two decades, writer-director Guillermo del Toro has mapped out a territory in the popular imagination that is uniquely his own. From his first feature-length film, the modern classic Cronos, to his best-selling novels, to his latest movie Pacific Rim, del Toro has proven himself to be a one-of-a-kind creative visionary able to bring his singular sensibility equally to Hollywood blockbusters such as Hellboy and to more personal projects such as the Oscar–winning Pan’s Labyrinth. Now comes a gift and gorgeous keepsake for his legions of fans: GUILLERMO DEL TORO CABINET OF CURIOSTIES: My Notebooks, Collections, and Other Obsessions (Harper Design; On Sale October 29, 2013: $60.00, 256 pages; ISBN: 978-0-06-208284-8), a lavishly illustrated book that is an intimate look into one of the most imaginative minds of this century. GUILLERMO DEL TORO CABINET OF CURIOSTIES—written with New York Times best-selling author and filmmaker Marc Scott Zicree—contains notes, drawings, and untold creatures from Guillermo del Toro’s private journals and filmmaking diaries, with never-before-seen characters, art, and ideas of things to come. The book is a captivating, intimate glimpse into the life and mind of one of the world’s most creative visionaries.

GUILLERMO DEL TORO CABINET OF CURIOSITIES begins with a foreword by James Cameron, who writes that del Toro’s art, “fearlessly confronts life in all its beauty and horror. He sees with the wonder and stark terror of a child. His notebooks are a map of the subconscious, and his films doorways into the dungeons of our dreams, allowing us to confront our own individual hearts of darkness, to do battle and emerge victorious.”

The next section of the book, entitled “Collections,” takes readers on a tour of Bleak House, del Toro’s “second home and working office, his artistic masterpiece, his cluttered attic, his pride and joy. It’s where he goes to draw and write, to recharge his batteries, to explore unfettered his creative whims.” From there, del Toro, in a series of one-on-one interviews with Zicree that are woven throughout the book, discusses his graphic inspirations, film analysis, storytelling, his “mainstays of horror,” his idea incubators, and so much more, all alongside vibrant full-color images of the things that have inspired his unique art.

The next half of the book contains faithful reproductions of del Toro’s most elaborate illustrated notebooks. Accompanying this rich mixture of imagery, narrative explorations, and notes are further one-on-one discussions with Zicree about each of del Toro’s films, translations of del Toro’s personal blend of Spanish and English, as well as additional annotations which further elucidate the ideas and contexts that gave rise to them.

In addition to the foreword by James Cameron, the book includes an afterword by Tom Cruise and contributions from other luminaries, including Neil Gaiman, John Landis, Alfonso Cuaron, and many others. 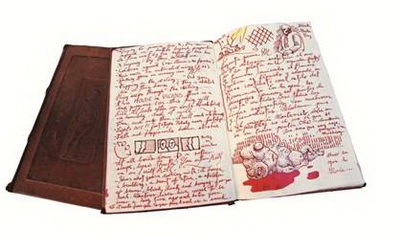 Born in Guadalajara, Mexico, Guillermo del Toro began his career working as a special effects makeup artist. He has since gone on to become one of the most creative and visionary artists of his generation. His filmmaking credits include the following titles, many of which he also wrote and produced: Cronos, Mimic, The Devil’s Backbone, Blade II, Hellboy, Hellboy II, Pan’s Labyrinth and Pacific Rim. Currently, del Toro is in production on The Strain for FX and next will write, direct and produce the feature film Crimson Peak.

Marc Scott Zicree has created classic episodes of Star Trek-The Next Generation, Deep Space Nine, “Babylon Five, Sliders and many more. He has appeared as a media expert on hundreds of radio and TV shows and is the author of the bestselling Twilight Zone Companion. He lives in West Hollywood with his wonderful wife, vile little dog, and affable big dog.