The first trailer is finally out for the long talked about I, Frankentein starring Aaron Eckhart. From the two and a half minutes of footage, you can tell that the movie definitely comes from the same team as the people who created the Underworld Franchise. In the film, Frankenstein’s monster, Adam, has been walking the earth for 200 years, fighting evil and now it looks like angels want his help in a larger war for the fate of mankind.

Official Synopsis:
200 years after his shocking creation, Dr. Frankenstein’s creature, Adam, still walks the earth. But when he finds himself in the middle of a war over the fate of humanity, Adam discovers he holds the key that could destroy humankind. From the co-writer of the hit supernatural saga, UNDERWORLD, comes the action thriller I, FRANKENSTEIN, written for the screen and directed by Stuart Beattie, screen story by Kevin Grevioux and Stuart Beattie, based on the Darkstorm Studios graphic novel “I, Frankenstein” created by Kevin Grevioux. The story is brought to life by a cast that includes Aaron Eckhart, Bill Nighy, Yvonne Strahovski, Miranda Otto, Jai Courtney, and Aden Young as Victor Frankenstein. 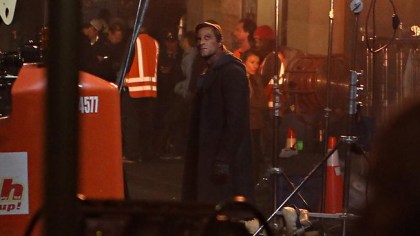