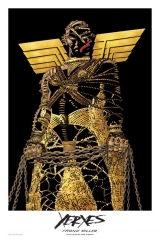 Dark Horse Comics has unveiled the first art from Frank Miller’s upcoming miniseries “Xerxes,” which serves as a prequel to his original 1998 graphic novel “300.”

While this is an update for the comic book, “Xerxes” is expected to also double as the prequel/sequel to Zack Snyder incredibly popular “300” film. There’s been a lot of talk about Snyder making a sequel, but for the most part it’s been in development hell due to Miller recent struggles to complete the comic book and script.

This image released by Dark Horse depicts the Persian King Xerxes in all his glory plus scar given to him by Leonidas at the end of “300.” The lithographic print is currently on sale over at Dark Horse Comics for $25 or $100 if you want it signed and numbered.

Here’s the product description:
Xerxes rose to power in fifth-century-BC Persia and became known as ‘The King of Kings,’ eventually raising and leading a massive army intent on ruthlessly destroying the hated Greeks who killed his father. Xerxes seeks nothing less than to become a god himself — and achieves his wish!

The piece is drawn by Frank Miller and colored by Dave Stewart.

“The time frame begins 10 years before 300,” said Miller, “and the story starts with the Battle of Marathon, which was killer to draw, by the way, even if it was a lot of work. The lead character is Themistocles, who became warlord of Greece and built their navy. The story is very different than 300 in that it involves Xerxes’ search for godhood. The existence of gods are presupposed in this story and the idea is that he’s well on his way to godhood by the end of the story.”

Miller also promises that the 300 characters will make a cameo but does not guarantee Gerard Butler’s Leonidas. It does however make it more likely that Ephialtes (played by Andrew Tiernan) will have a much larger role in the sequel.

“There’s an extended scene set in Persepolis,” adds Miller, “for instance, where he takes power and there are several scenes where he is going through his transitions and he’s shown speaking to his mother and his wife… The new tale climaxes with a massive naval confrontation that is so dense that it is fought like a land war and it ends on the same day as the events of 300.”