My Balrog is gonna wreck the Sh*t out of that bad Bruce Lee imitator Law!!!!! I’m so freakin excited for this game! Check out some killer screen shots after the jump!

I played the demo of this at Comic Con and have had a fighter game boner for it ever since. This game played great and to have the chance of using Ryu to beat down Kazuya or teaming up Paul and Ken is something a lot of us quarter circle forward hard punch players have wanted for years.

Today Capcom announced six new characters to the roster and we get some new snapshots of this beautiful game. From the Street Fighter corner Balrog, Juri and Vega have now been confirmed and from the Tekken side Paul, Law and Xiaoyu will be playable in the game.

My Balrog is gonna wreak the shit out of that bad Bruce Lee imitator Law!!!!! I’m so freakin excited for this game! Check out some killer screen shots below, enjoy. 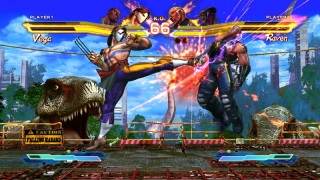