Liam Neeson gets stranded in the wilds of Alaska and kicks wilderness’ ass! 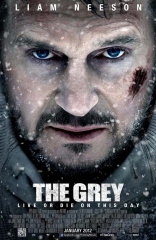 I have a little man crush on the new badass, Liam Neeson. Since ‘Taken’, Liam has become an action star. I know he did other action films but that was the movie that seemed to lead him on this new career path of ass kick-ery. As it turns out he’s pretty great at it and now I get a little excited to seem him beat down and kill a gaggle of bad guys, yes I know ‘Unknown’ was a huge let down, but this time around the ‘bad guy’ is the wilderness and Liam is up for the challenge. The film is based on the short story “Ghost Walker” by In Mackenzie Jeffers who also wrote the screenplay with director Joe Carnahan.

Plot Sysnopsis From IMDB: In Alaska, an oil drilling team struggle to survive after a plane crash strands them in the wild. Hunting the humans are a pack of wolves who see them as intruders. 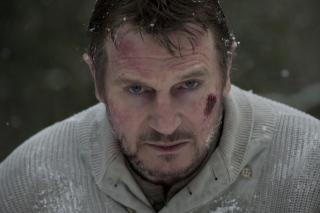 In ‘The Grey’, Liam plays Ottway, a man working for an oil drilling company in the wilds of Alaska. Early on you learn that he really doesn’t have much to live for. Of course then mother nature comes bashing her way into his life, so he grabs hold and nails her like the true bad ass cock jockey he is. (I just wanted to write the word cock jockey cause it made me giggle.) The plane crash sequence in this film is intense, I have a fear of flying and normally I’m not bothered by plane crashes in a film but this one had me gripping my arm rests. I’m such a plane wuss I honestly think my left hand was shaking a little… though that could have just been the brain tumor I’m working on.

Once downed, the wily gang of thugs and ex-cons have to somehow work together to possibly find civilization. While Neeson is the head of this hydra, his supporting cast really fill this to the brim with great performances. Dermot Mulroney, Frank Grillo, James Badge Dale and Joe Anderson are the rest of the rag tag group battling the cold and a pack of wolves. As the film progresses you see that for some of the men trip is almost just a way of letting go and accepting death and others grasp at that last hope back to their civilized life. 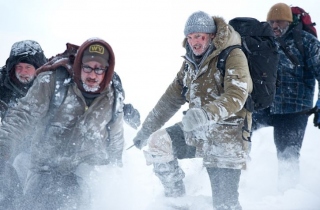 Joe Carnahan (‘NARC’, ‘Smoking Aces’, ‘The A-Team’) directs this film and while he’s had a batch of bad ones I’ll gladly put this next to ‘NARC’. He’s back to kicking films’ ass and giving us incredibly intense moments. There was even a collective jump and gasp in the theater that actually didn’t feel like a cheap scare. Between solid characters and intense action, the film only has a few slip-up moments where I felt it gets a little too melodramatic and could have used a bit more of an edit. This doesn’t ruin the film but one scene near the end came close to pulling me out of the movie entirely. The saving grace was Liam’s performance that just sucks you right back in.

It should be mentioned that while Neeson is the star, Grillo and Mulroney really shine in this film. You get pulled in and find yourself caring about the characters which makes the more intense sequences play out so well. These actors bring such a life to their roles that you find yourself getting nervous when the wolves come around or when they have to leap from this or jump into that.

As a whole I definitely recommend seeing this in the theater. It’s a great mix of action and character. It’s smarter than your average action flick yet it doesn’t beat you over the head with it. While there are some faults and slip ups I think it’s a fun ride of a movie and you’ll be talking about the ending for awhile after the last cut. I do recommend you stay for the end of the credits.

One thought on “YBMW Movie Review: ‘The Grey’”