The first and most likely only Katchoo action figure that we’ll ever get… and it’s a good one. 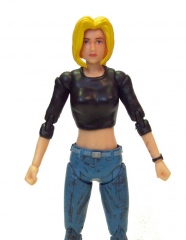 After three years since their initial announcement and various growing pains, Shocker Toys’ long awaited Indie Spotlight Series 1 is finally here. Series 1 consists of five collectible action figures from popular indie comics such as David Mack’s Kabuki, Terry Moore’s Katchoo from Strangers in Paradise, Rob Schrab’s Scud: The Disposable Assassin, Sam Kieth’s The Maxx and Jim Valentino’s ShadowHawk. Each figure comes with either a white/black Isz or Pink Fairy (Maxx comes with all three) in addition to character specific accessories and/or exchangeable parts. Up for review today is Katina “Katchoo” Choovanski — “The Original Angry Blonde” — of Strangers in Paradise fame.

Normally when you think of comic characters that’d make great action figures, you think of anyone other than plain civilians and characters from drama driven indie series like SiP. That’s not to say Katchoo from Moore’s Eisner wining series doesn’t deserve getting the action figure treatment, because she most certainly does. It’s just that it was a rather bold decision made by Shocker Toys to include her in the initial series. It is also for this very same reason why this is probably the first and most likely only Katchoo action figure that we’ll ever get — not counting the Katchoo statues/busts made by Clayburn Moore a few years back of course.

Like ShadowHawk which we reviewed earlier, the package design for Katchoo uses good space and was designed with collectors in mind as it is resealable so you can take Katchoo in and out of her plastic/cardboard prison. She fits in great scale wise with most 6″ figures and Shocker Toys’ own 6″ universe. Being that Katchoo is 5’3″, the scale is appropriated correctly as she is significantly shorter than most 6″ figures. 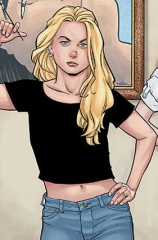 Unlike superheroes, Katchoo doesn’t really have a defined look, so Shocker Toys took it upon themselves to sculpt her in a black shirt and blue jeans. With minimal sculpting, this makes her come off looking fairly plain. For the most part, the shirt looks like a shirt, however there’s some oddity with her shirt sleeves. I’m not sure if she’s supposed to be wearing a t-shirt or a long sleeved shirt, because either way the sleeves are too long or not long enough. Jeans, especially tight women’s jeans, are something hard to capture and sculpt right. Luckily, Shocker Toys were up to the task and was able to do a decent job capturing the look. It’s not perfect, but passable especially since Katchoo’s only a 6″ action figure and is super articulated.

The face sculpt is one of the better and more beautiful 6″ female face sculpt that I’ve seen. When compared to Moore’s artwork, it seems a little off, but it’s still a great representation and perfectly captures both her round nose and the tiredness underneath her eyes. What hurts the sculpt the most is perhaps her worried or expressionless face. I think I would have rather preferred a pissed off or smirky look. Katchoo is sculpted with a ponytail, and although most of the images I’ve found online have her wearing her dirty blonde locks down, I’m sure she does wear a ponytail in the comics from time to time. The hair sculpt is two separate pieces and probably could have been better, but I’m not really complaining.

The paint application for Katchoo is solid and clean all around. She has some dark yellow wash in her hair and there seems to be a light pink wash on and across her face. Since there are no sculpted folds on her jeans, whatever folds/textures are painted on in black and they look good. Her tiny wrist watch is painted black with a silver face, and on the underside of her left forearm there are little painted lines that probably represent scars for when she tried committing suicide. The Pink Fairy is painted in an assortment of red/pink/purple. It’s a little sloppy, but not really noticeable since it’s such a small figure. 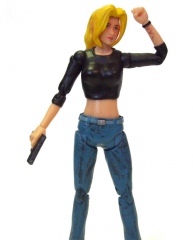 Like the rest of the Indie Spotlights, Katchoo features a nice blend of both aesthetics and articulation. I counted around 23 points of articulation, with a majority of them being ball joints and some hinges. The design of the shoulders and hips are identical to that of ShadowHawk and resemble true ball-and-socket joints and function similarly and realistically to how we articulate and move.

The shoulders move really well and have a wide range of movement. The same articulation also doubles as a cut bicep and makes the figure look more natural and aesthetically pleasing when posing. The chest and waist are similar to the 25th Anniversary G.I Joes but offer excellent range and can swivel in all directions and actually hold the position without any problems. If there was a limbo contest for action figures and Gumby wasn’t invited, Katchoo would most likely win. The hips are similar to the shoulders, although they don’t work quiet as well because you can’t swing the legs fully forward. This problem is actually more glaring in Katchoo than in ShadowHawk. The ankles and wrists are both ball jointed. And while the ball joint is fine for the wrists, it doesn’t work quiet as well for the ankles because it limits the backward movement and doesn’t really do much for the movement from side to side. This problem becomes more apparent in Katchoo as the movements are restricted by her sculpted jean cuffs.

Visually, Katchoo is an unremarkable figure/character design by all means, yet there’s still something undeniably cool and sexy about her thanks to Moore’s great storytelling and character development. Although the likeness is a little off, Shocker Toys has produced an attractive looking female action figure with lots of articulation – although there really isn’t a lot of poses you can put her in. She fits in great with other figures and the only disappointment SiP fans would ever have is if Shocker Toys doesn’t follow up and make a Francine and a David figure to keep her company.