‘Harry Potter And The Deathly Hallows’ Part One Movie Review

I am pleased to say that they stayed MUCH closer to the story this time, but it still felt rushed to me. 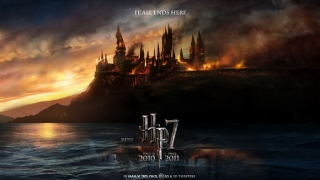 I was beyond excited when I found out I was getting the chance to view “Harry Potter and the Deathly Hallows” Part 1 on the evening of Monday Nov. 15th at 7pm, four full days before it opened to the public. It is safe to say there was some squeeing involved. Still, I have been very worried about the movie, as I walked away after seeing HP6 fuming so badly there may have been visible steam radiating from me. As a huge fan of the book series, having read them all many times, I could not BELIEVE what they did with Half Blood Prince. Granted, those who have not read the book may be unaware of what they were missing, but I believe that the things they changed or left out were integral parts to the story. However, I digress as that is a rant for another day.

THIS is about HP7.1, and I am pleased to say that they stayed MUCH closer to the story this time, but it still felt rushed to me. There was 2.5 hours of movie goodness, yet I still walked away wishing there had been more. Not meaning more of what is to come in the next half (because of COURSE I wish that could be watched right away), but more of what should have been there in this half. I had thought that would have been easy as the first half of the book drug a bit for me anyway, so I figured it would be easy to put the important parts into the movie yet I still walked away going…Well what about this? What about that? How are they going to address this part later if it was not preempted here? Again, this may be just because I am viewing it as a fan of the book and the general public thought everything was great, but who knows.

It was strange to watch in a way, being so different than the movies we have seen up to this point. No Hogwarts, no Professors, no fellow students, and even much more so than just in the first half of the book itself. I was prepared for that going into it, but I still walked away feeling off about it. To be honest I have been struggling to write this since I watched it, and I still haven’t come to a full conclusion of what I think about the film other than it was TREMENDOUSLY better than Half Blood Prince story wise.

The film was very raw. Not Blair Witch raw, but not a piece of cinematic beauty either.

I understand why they filmed it this way, but I can’t say I completely agree with it. Also, I wanted more from the battle scene, but hey, at least there WAS one this time!

There is one scene I have to address directly, so spoiler alert I guess…but it doesn’t spoil anything about the story itself. I think I know what the director was going for, but he failed miserably in how it came across and it’s still bothering me. Walking out of the movie I found out I was not alone on this, because I heard many others WTFing it as well. What I believe the scene is supposed to represent, is simply Harry trying to cheer up Hermione even though he knows she is upset, partly so because of him. Harry pulls Hermione up to dance, but the way he pulls her up and tosses aside the locket you think he is about to lay her on the table and go at it…which is awkward. Then the dancing starts and you laugh and enjoy and you decide to overlook the odd moment, that is until the end of the dancing where he then acts like he is going in for a move on her again, and she brushes him away. I THINK it was supposed to look like even though they laughed for a moment she is still upset and things are not OK yet, but WOW does that fail miserably. Now, if they WERE trying to make it seem like Harry was making a move on Hermione….WHY would they do that?! Harry likes Ginny. Granted, it is not portrayed as clearly in the movies as in the books, but it is still there. Also, it is no secret this point that Hermione and Ron have a…thing. The whole moment was wildly uncomfortable, and it sounded to me like it was that way to people whether they had read the books or not.

Overall I enjoyed it for what it was…the beginning of the end, the lead up to the ending battles. And so help me, if they do not give those battles the glory they deserve I think I might die a little inside. I am worried about how much they have to cram into Part 2, but I retain hope. I will be there for Part 2, bright eyed and hopping with excitement.