CP gets his fat paws on Bob’s Burgers Season 1 DVD set and writes about it in 3D! (not really)

“The Child Molester? I Thought This Was A Family Restaurant.”

I’ve had a comedy crush on Jon H. Benjamin’s voice since he voiced Coach McGurk in ‘Home Movies’. His oddball, deadpan confused everyman voice matched with his near perfect comedic timing can make pretty much any show, good or bad, funny. So with my Jon H. Benjamin bias in full view I think with or with out him ‘Bob’s Burgers’ is a great big greasy new ‘Bacon-ings*’ of fresh Grade A Comedy Beef. Needless to say I’m a fan of the show and so glad to see FOX add something that isn’t rehashed McFarlane crap. How is in not noticed that he keeps selling EVERYONE on the same damn show with the same jokes???? Sorry ’bout that folks it’s not the comedy that gets me angry, it’s the fact that he has three of the same shows in spots something new, fresh, or simply just different could be on. 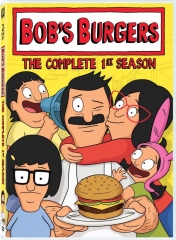 Enough bitchy nerd rant back to ‘Bob’s Burgers’. It’s created by Loren Bouchard who always brings his shows a playful feel to the voice acting. It seems to me that, while there’s a script the actors are left to really just go off at times and this is truly what makes Bouchard’s shows stand out in the best way. It doesn’t feel like actors reading from a script trying to hit every joke precisely, it feels like really funny folks doing what they do best when you lock them in a room together. That is of course, being really funny!

The 2 DVD Disc set is nicely packaged and some cool art of the DVD’s themselves, if you’re a fan of the show then you’ll be pleased with the packaging. The menus on the disc are nicely animated and as you click around there are some great sound bites from the show. I recommend going to the episode selection screen on disc one and listen to Gene’s (Eugene Mirman) ‘Da-Ding-Ding’ song all the way through.

The quality of the DVD’s is very good, it’s a solid anamorphic widescreen transfer and the colors pop pretty nicely. The 5.1 audio is solid and while it’s not like watching some high end blockbuster, they do take advantage at times with Tina’s (Kristen Schall) mumbles and Gene’s (Eugene Mirman) yelling. 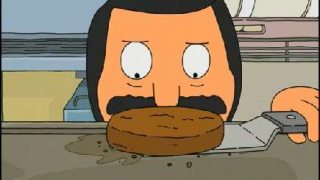 Content is king when you’re dishing out cash for DVD’s and while ‘Bob’s Burgers’ might be a bit lighter than some sets, it delivers the goods for fans of the series. Like most, this set has commentary but unlike many DVD’s it’s actually pretty good commentary. Each episode is a mix of cast and crew, as you go through the season the amount of folks in the room does start to dwindle but, it’s worth a listen. Not only do you get insight to the show’s creation and how it was made and blaa, bigity, blardy, blaaaaa. But, you also have the pretty damn funny cast being, well, pretty damn funny.

Other extras include audio outtakes from ‘Bed & Breakfast’ and ‘Sexy Dance Fighting’. This really shows off the improv style of the show and lets us see just how nasty the actors get. While listening to these alternate or cut scenes a photo montage of the recording sessions mixed with show art plays. These are kind of funny and a nice glimpse into how the scenes are formed. A music video featuring Steve Agee, a kind of hot girl, and a special Jon H. Benjamin appearance for the song ‘Lighting Up The Skirt Of The Night’. The video is pretty low-fi and silly, it’s truly so short that while Steve Agee making funny faces was, well… funny. It just didn’t matter much if I ever saw that video or not. 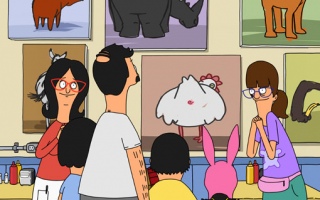 There’s also a short animated piece that could have possibly been an internal promo or something called ‘Louise and the Chalkboard’, this involves Louise (Kristen Schall) messing with her Dad’s chalkboard much like she does in the show but then goes off into a little skit of her drawing up her family and giving them burger based names. It’s super short and funny, so watch it.

The big grail of this set for fans would easily be the original demo that sold FOX on the show to begin with. It opens with an introduction from Loren Bouchard you reveals a major aspect of the show that was cut early on. This segment includes a scene from the original pitch and then the full demo piece Loren produced for FOX that eventually became what the show is now. Honestly I love these kinds of extras because they give great insight into the show itself and it’s just always fun to see how it started.

If you’re a fan of the show I highly recommend this set as it’s pretty complete with some solid commentary and extras. Hearing Jon H. Benjamin swear as Bob during audio outtakes really shouldn’t be missed by anyone with a good sense of humor. If you haven’t seen the show yet get on the damn fan train for this on because it’s good and deserves support!