“Terra Nova” is what would happen if you crossbred “Avatar” with “Jurassic Park” and threw in a bit of time travel. Stephen Lang even plays the same character he did from “Avatar”! 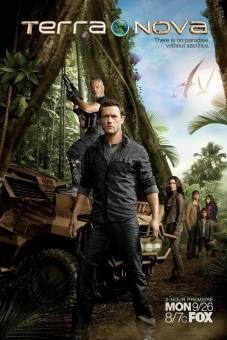 When I saw the previews heralding the new fall show, Terra Nova, all I could think of was “Wow….so is this like “Avatar” but told primarily from the point of view of the humans? Or maybe this IS “Avatar” but more like the prequel.”

All that I was missing was the Smurf-y supermodel aliens, the awesome flying dinosaurs (someone buy me one, please)….and, oh yeah, some characters that I actually like.

In case you were also stuck in a time fracture and were not innundated by all the previews, here’s an excerpt from fox.com :

Terra Nova follows an ordinary family on an incredible journey back in time to prehistoric Earth as a small part of a daring experiment to save the human race.

In the year 2149, the world is dying. The planet is overdeveloped and overcrowded, with the majority of plant and animal life extinct. The future of mankind is in jeopardy, and its only hope for survival is in the distant past.

When scientists unexpectedly discovered a fracture in time that made it possible to construct a portal into primeval history, the bold notion was born to resettle humanity in the past – a second chance to rebuild civilization and get it right this time.

In case you can’t tell, I don’t really care for the show. Here’s why.

Is it me or does this storyline not seem entirely original? This series is what would happen if you crossbred “Avatar” with “Jurassic Park” and threw in a bit of time travel for the hell of it. Wait, Steven Spielberg is the producer!!

They even have Stephen Lang playing pretty much the same character he did from “Avatar”!!! Jeezus….

It’s pretty rare for me to come across such a heavily hyped show and not find a single character I like. In fact, I can’t really think of any right now. Usually, there’s at least one character that I hate so much, I end up sort of liking them….kind of like Nancy from “Weeds”. I keep watching that show because I like watching her slo-mo train crash her way through life and am always left stupified by the fact that she manages to worm her way free.

But “Terra Nova”… there is NO character I’ve seen so far that I like! I want them all to die! All I kept thinking about was “Wow….if this group of dorks is who they picked to ‘save’ the humankind, then we are seriously f***ed.”

Actually, I take that back. I do like something from the show.

The best part about the show so far was watching them eat all the dumb asses who were stupid enough to leave the settlement and go get drunk in the jungle FULL OF DINOSAURS!!! It’s called “natural selection” and they obviously didn’t fit the bill. This brings me back to why I think humankind (in the show) should just bend over and kiss our butts goodbye because these are the people who are supposed to save us by “doing it right” this time around. Oh, God….

So I take it back. I like the dinosaurs that probably never really existed in real life. I’m wondering how many paleontologists in the world are crying right now. Actually, when I was watching the season premiere of this show, I kept wondering what Ross Gellar’s reaction would’ve been if “Friends” was still on and they did a scene where he’s watching “Terra Nova” too. That would be pretty funny.

So, I have a new show in which I really want everyone to be eaten by dinosaurs because they’re the only characters I actually like and the story is as strong as my overcooked spaghetti. Oh, I forgot to mention one thing. The dialogue is completely unoriginal and uninteresting. I mean, you know it’s bad when Clyde and I can guess, pretty much verbatim, exactly what the characters are going to do and/or say. Maybe we should be writing the show even though we have absolutely no experience in writing this stuff because, hey, it can’t get any worse.

I really don’t want to watch anymore but the only thing they did right so far was introduce early the conflict between the Sixers with the rest of the settlement and the son who allegedly is behind the crazy mathematical scribbles on the rocks by the waterfall. I’m interested in knowing what he’s doing. That’s pretty much the only reason why I’d continue to watch.

Alas, that’s not really reason enough for me to want to waste an hour a week. Unless the story suddenly picks up or takes a COMPLETELY original twist and continues to turn, I have no interest in watching something that is so easily predictable.