What better way to celebrate the new year than by watching a movie full of awesomeness and teeth rotting innocent love? 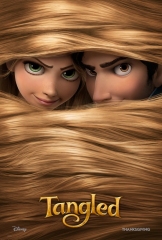 What better way to celebrate the new year than by watching a movie full of awesomeness and teeth rotting innocent love? Yeah, I can’t think of another idea either so I braved the hordes of rowdy kids and tired parents to watch Disney’s latest offering – Tangled. Screaming kids and not-so-quiet adults hissing “SSSH!!! BE QUIET!!” to their brood aside, I totally loved this movie.

In case you were also locked up in a tower without Internet, smart phones (or even not-so-smart phones) and/or company of any kind besides the imaginary variety, here’s a synopsis of the movie per IMDb and Douglas Young :

After receiving the healing powers from a magical flower, the baby Princess Rapunzel is kidnapped from the palace in the middle of the night by Mother Gothel. Mother Gothel knows that the flower’s magical powers are now growing within the golden hair of Rapunzel, and to stay young, she must lock Rapunzel in her hidden tower. Rapunzel is now a teenager and her hair has grown to a length of 70-feet. The beautiful Rapunzel has been in the tower her entire life, and she is curious of the outside world. One day, the bandit Flynn Ryder scales the tower and is taken captive by Rapunzel. Rapunzel strikes a deal with the charming thief to act as her guide to travel to the place where the floating lights come from that she has seen every year on her birthday. Rapunzel is about to have the most exciting and magnificent journey of her life.

The formula behind most enduring and beloved fairy tales are all present here but with a few knots and tangles thrown into the mix to keep things interesting. The theme that sticks out most in my mind is the spin on concept of self sacrifice. I should warn you about impending spoiler alert here.

Most fairy tales that bear the Disney stamp involve self discovery and, to a degree, sacrifice of self for the good of family, country, etc. See Belle from “Beauty and the Beast” and Mulan. But here’s what sets Rapunzel apart. She’s the only one of the Disney princess heroines I can think of who :

1. Posseses magical powers (no, Ariel does not count because she was a mermaid and not magical).
2. Agreed to what basically amounts to a literal eternity of lifelong servitude to a leech of a horrible woman in return for saving the man she loves.
3. Flynn is the only hero I know of who willingly chooses death in order to guarentee freedom for his love…and dies.

Seeing as how this is Disney, the miracle of love (and a certain magical tear) brings him back to life. But the impact of this didn’t escape the audience. I overheard a little girl asking her mother several insightful questions about life, death, why people are afraid of growing old and do tears really bring people back to life.

What an awesome decision to cast Mandy Moore as Rapunzel. Not only does she have a lovely voice but they only had to hire one person to provide the voice AND singing for Rapunzel. Nice. Way to go, Disney!

You know, most Disney movies have at least one song that I will gleefully sing in maniacal glory while showering and driving….but I didn’t find one in “Tangled”. “Mother Knows Best” was too creepy for me. The love song “I See The Light” didn’t inspire within me the desire to grab a mic and head into my nearest karaoke joint. The only song I did like and like a LOT was “Healing Incantation”. I love the longing Mandy Moore was able to infuse into it and it’s exactly the kind of song I’d program into a music box…if I knew how to program music boxes…and if I had one. As much as I love this song, it’s not exactly the kind of song that lends itself to happy, harpy-like screeching when I’m alone or in front of friends.

This doesn’t mean I won’t try though.

All in all, I love the movie. I even cried. Yes, I cry during Disney movies. Don’t make like you’ve never teared up a bit and if you never ever did in even ONE Disney movie, any Disney movie….then I pronounce you dead inside. Just kidding. Sort of. Aaaaanyway, moving on.

1. I love Pasqual, Maximus and the merry band of Snuggly Duckling misfits. Disney always creates an awesome support cast of memorable characters that, for me at least, steals the show. I have a sneaking suspicion that this movie will be the reason why pet stores sees a huge spike in the sales of chameleons.

2. I really really want a horse now. I will name him Maximus and feed him a gazillion apples.

3. Why did Rapunzel’s feet never get dirty? For a girl who lived entrapped in a tower, she sure has really tough feet.

4. Flynn’s take on “Blue Steel” with his “Smoulder” look just made me think he looked like a constipated douchebag. Not. Sexy.

5.. I nearly died laughing when Flynn revealed his secret shame is his name – Eugene and I realized there was a lot of Chinese people who worked on this film. The reason why is because my mom wanted to name my brother “Eugene” when she was pregnant with him. My sister and I immediately launched a compaign against this on behalf of his unborn ass because we didn’t want him to get his butt kicked every day at school. We demanded to know why our mother would wish this upon him. She said it’s because “Eugene” sounds like “You Jin” in Mandarin Chinese. “You Jin” translates into “Has Gold” which implies prosperity and that’s what my mother wished our brother would be blessed with.

Well….when you put it like that…my sister and I solemnly thought about it for 0.5 seconds and vetoed the decision.

But do you get the joke? “Has Gold”? Eugene….I mean, Flynn calling out “Rapunzel, Rapunzel! Let down your GOLDEN hair!”

And in the end, even though she no longer possessed magical, gilded hair, he still fulfilled the wish of his name. He was blessed with a princess and a wealth of love. Aaaawww….