Check out the first part of our Star Wars Muppets review featuring Kermit The Frog and Miss Piggy as Luke Skywalker and Princess Leia and Bunsen Honeydew and Beaker as C3P0 and R2D2! 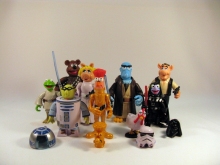 The Disney Theme Park Exclusive Star Wars Muppets action figures finally came out last week! I’ve been waiting for these to be released ever since we first heard of them over a year ago. Now, even though I live in Orlando, there is no chance that I’m going to go anywhere near Disney World on their busiest week of the year. Thankfully, you can call up the theme park and they’ll be happy to ship any park exclusive merchandise to anywhere in the world at no extra charge (other than shipping).

The Muppet Star Wars action figures (I’m hoping that is just series one) are the toys that Muppet fans have been dying for ever since Gonzo first put on his version of a Darth Vader Helmet in the Star Wars Episode of The Muppet Show. Nine figures were released (including Camilla), but we ended up with so many photos of the figures that we’ll be splitting this review into two parts.

The breakdown of figures are as follows:

– Kermit The Frog and Miss Piggy as Luke Skywalker and Princess Leia
– Bunsen Honeydew and Beaker as C3P0 and R2D2
– Link Hogthrob and Fozzie The Bear as Han Solo and Chewbacca
– Sam The Eagle and Gonzo as Obi Wan Kenobi and Darth Vader – With Camilla The Chicken as a Stormtrooper.

In part one, we’re just going to focus on the first two sets. Now, before we dive in, I should probably put some sort of disclaimer. I will tell you up front that I like these figures, but… I’m spoiled. Having collected the Palisades Muppet figures, it is nearly impossible for any other Muppet figures to live up to that standard. 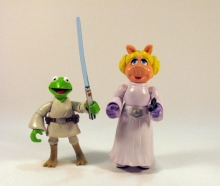 Don’t let this part of the review throw you for the whole series, but if there was a low point in the figures, it was definitely these two figures. Granted, I really don’t like Miss Piggy… like I once wrote an online dating ad for myself that included the line: “If Miss Piggy is your favorite Muppet, we probably aren’t a good match.” However, my dislike for her is not what made me not like the figure that much.

Overall impressions –
You can’t have a Star Wars Muppets set without Kermit and Piggy as Luke and Leia, but there were a bunch of little things that just left me wanting on these figures. Don’t get me wrong, if you are going to buy the set, you’ll need to buy them, but they both left me feeling kind of … eh.

Paint and sculpt-
If you aren’t a collector and are just a casual Muppets or Star Wars fan, you’ll be fine. As I’ve been reviewing toys for 6 years now, sloppy paint is something that I’ve come to notice quickly and then fixate on. On Kermit, his belt was pretty sloppy as far as paint transfer over onto his shirt. On Piggy, it was more of an issue of paint rub from the packaging… and the fact that her eyes are kinda jacked. Remember that phrase, you’ll be hearing a couple more times in these reviews. For some reason, it looks as though Miss Piggy has a serious case of the DERP!

When it comes to sculpting, Piggy was actually fine. Kermit on the other hand is just off for me. His head is just not the right shape. It almost looks a little squished. Damn you Palisades for making me expect perfection!!! 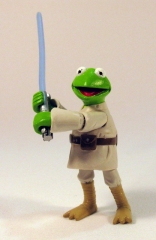 Articulation –
This is a really interesting category for the Star Wars Muppets. Overall, Piggy was fine. She had 6-8 points of articulation and a swivel head. Kermit was pretty much the same, but I was really impressed. I always have a hard time posing figures, especially ones holding light sabers into that 3/4 pose that is always on the toy box. Kermit worked out great. his hands lined p so they both held the light saber, all the other angles fit together and it just worked.

Star Wars Accuracy-
Whatever gripes I might have about the figures, they excelled when it comes to accuracy to Star Wars. The costumes are pretty much perfect, as are Piggy’s blaster and Kermit’s Light Saber.

If you’re a Muppet or Star Wars fan, they are still worth picking up. It’s $19.99 for the pair, which is actually cheap considering that it is theme park merchandise.

Bunsen Honeydew and Beaker as C3P0 and R2D2 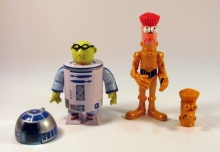 General impressions-
Next up is Bunsen Honeydew and Beaker as C3P0 and R2D2. Next to Gonzo, I thought that Bunsen was the most clever figure of the set. Beaker had some issues, but was still an overall cool figure.

Paint and sculpt –
Overall, I found the paint on both of these figures to be a lot cleaner. I also, with the exception of the way they designed Beakers arms, loved the sculpts on both of these figures. Unlike Kermit and Piggy, these figures have a special bonus. Bunsen comes with a helmet that completes the R2d2 costume and Beaker has a second head that makes him fully robotic. My only problem with the paint is the eyes again. Beaker isn’t Derpy like Miss Piggy, but he is looking up at something. Is he looking at a bird? We’ll never know! Even the robot version of the head is looking up, so maybe it is on purpose and not just a production error. Who knows…

Articulation –
Considering that Bunsen is essentially a trash can, the fact that his arms move is pretty good, he gets a pass. Beaker on the other hand… ack. I get that c3P0 had the pistons or whatever connecting his upper and lower arms, but all that does in this figure is lock his arms into a permanently bent position. If his arms weren’t going to have an elbow joint, I’d have rather them been straight. 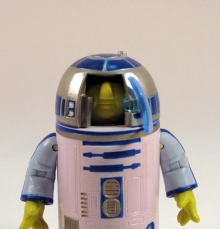 I know I already mentioned this, but I loved it. By adding the helmet portion of Bunsen’s costume he completely becomes R2! The only difference is that there’s a window you can open to let Bunsen see out. I really liked everything about this figure.

Star Wars Accuracy –
I’ve got no complaints here at all. Sure, if you look at R2’s feet in Star Wars, you don’t see trousers sticking out, but otherwise, both figures look excellent.

Check back later tonight for part 2 which will include:
– Link Hogthrob and Fozzie The Bear as Han Solo and Chewbacca
– Sam The Eagle and Gonzo as Obi Wan Kenobi and Darth Vader – With Camilla The Chicken as a Stormtrooper.