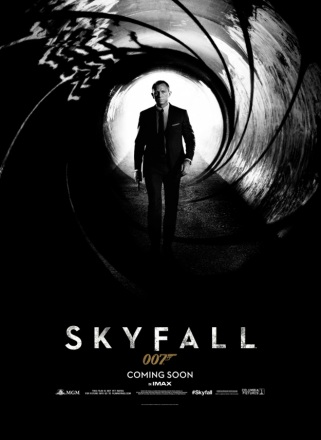 I finally had time this past week to finally watch a movie. Guess which one we went to? I’ll give you a hint. His name is Bond. James Bond.

In case you were held captive by super secret spies and had no idea what this movie’s about, here’s a quick debriefing as provided by IMDb:

Bond’s loyalty to M is tested as her past comes back to haunt her. As MI6 comes under attack, 007 must track down and destroy the threat, no matter how personal the cost.

That message will self destruct in 5 seconds. Just kidding.

I should warn you that there will be spoilers embedded everywhere in this review.

Daniel Craig is, hands down, the best Bond ever. He’s raw. He’s a BAD ASS. He’s sexy as f@#*. Have you SEEN those baby blues? God, and that stubble on his jaw….delicious. And when he wears a tux….I need a moment.

Yes, I said it. The only actor who could ever come close to Daniel Craig is Sean Connery. Here’s a brief breakdown of what I think of actors of James Bond (that I can remember):

Sean Connery is too Suave. Rico Suave. I can smell his after shave from all the way over here. Sean Connery’s interpretation of James Bond was the embodiment of a total lady-killer debonair spy. I could buy him as the Spy Who Loved Me.

Pierce Brosnan reminds me too much of a used car salesman who’s trying to sell you a car while not-so-secretly undressing you with his eyes…and hands at the same time. Come on. This is the same Bond who, after boinking Denise Richards, said “I thought Christmas only comes once a year”. Ew. Gross. Gag me (no double entendre intended here). I know the Bond franchise is fond of using naughty innuendo as part of the whole tongue-in-cheek humor…but come on. Pierce Brosnon as Bond was just too slimy otter for me.

Everyone else – ….uh….who were they again?

So besides the fact that I think Daniel Craig is a tasty mouthful of a man, why does he do Bond so well? The only thing I can say is that he’s what James Bond should be. Ladies wanna love him. The fellas want him dead. He gets the job done and he’s not afraid to get down and dirty at the same time. I can’t see Sean Connery bashing some guy’s head over and over again with such single minded intent into a dirty toilet like Daniel did in “Casino Royale”. I DEFINITELY can’t see Pierce Brosnan chasing the baddies down on the rooftops of the Bazaar in Turkey with such intense, kick ass focus like Daniel Craig.

The scene that does Daniel Craig the most justice in how I’m trying to describe him is part of the first action scene of “Skyfall”. The bad guy he’s chasing shoots him through the right shoulder. Daniel barely lets that slow him down. He glances at the wound while on the train and acknowledges it only by adjusting his coat and sleeves as he grimly strides towards his enemy.

He’s like a totally focused, highly trained killing machine with refined manners in super hot clothes. None of the other actors could believably deliver the ass beating in such a brutal and believable manner like Daniel Craig.

WAAAAHHH!!! No more Judi Dench as M. God, that’s depressing. She totally rocked this role and she went out with a bang. I’m not sure they could ever have another female fill the shoes she’s created for M because she personifies so perfectly what comes to mind when I think Old British Lady Ball Breaker. You have to have a stiff upper lip and girly cojones of steel when working with James Bond.

Not a lot of women could handle Bond the way M did. Maybe the new M isn’t a woman anymore. I’m not sure how I feel about Ralph Fiennes as the new M. I liked the dynamics of an older, seasoned, grizzly woman at the helm of M16 and unleashing Bond into the world. It was always a weird, mother-errant son relationship and I liked it. I think the agents did too as I could’ve sworn I heard them address her as “Mum” a few times.

On a side note, is it a prerequisite that every person’s last name start with the letter “M” in order to be considered for the job?

The new Q is…..a baby. He’s like a giant, scruffy puppy dog running around with all the big, older dogs. Next to Bond, Q has always been my favorite character. But not this time. He’s just not as witty and endearing as the Qs who have come before. I get that the nature of espionage has changed since the first Bond movie. I get that hackers are capable of wreaking more damage with one key stroke on a keyboard than a bullet. But half the fun of these movies were seeing what kind of crazy gadgets that Q could equip Bond with!

As far as I could see, he was only given a radio transmitter thingy and a gun that will only fire if Bond is the one holding it. Btw, on another side note, that is BRILLIANT!!! Every gun should come with that feature. Just saying.

Most of the baddies in previous Bond films weren’t characters you actually secretly want to see win but Silva is different. First of all, he’s funny and charming in a deadly viper kind of way. You just like him and you’re not sure why because you know he’s supposed to be the bad guy.

“Supposed to be” being the key words.

Throughout the course the movie, you learn why Silva became the Silva we see on the screen. You start to feel for him and almost understand why he’s driven to do what he does. He reveals his wish of death in such a poignant way and you start to feel BAD for him! He’s tried ending his life while being tortured in captivity but the cyanide pill wasn’t effective. Suicide was denied him by his hands….and so he sought death by the hand of M in a kind of double homicide. He couldn’t kill himself so he turns towards M to help him finish the job and plans for it with mind boggling obsession. In a strange way, it made sense because the writers did such a good job in fleshing out this character.

He’s creepy (especially when he tells the story of the two rats) and yet you can’t tear your eyes away from him because you don’t want to miss what he does next. This movie could’ve easily been named The Tale Of Two Bonds because I could believe Bond turning into a Silva-like character if the perfect storm of events occurred in his life. It’s not that far of a leap to understand why Silva snapped.

Better yet, this could’ve been called Spy Versus Spy. Remember those two guys? That’s what this movie reminded me of. They’re both the same, came from the same place and yet, like Highlander, there can be only one.

I’ll admit, I was kind of sad when he died. Of course, I’d much rather see Daniel Craig walk away….but a small part of me hoped that Silva would somehow survive (yet again) and come back in another Bond movie. Too much to hope for?

The story is killer (har har har). Even though this movie clocks in at over 2 hours, you don’t realize how fast the time is racing away. You’re so involved in how the story and characters unfold. The movie opened with a stunning sequence of crazy that had me shoveling caramel corn into my mouth at a breathtaking pace. There’s no gratuitous action scene for the sake of having action. Every scene had a purpose and I loved every second of it. In fact, I want to see this movie again!!!

This is a definite must-see in a movie theatre.

Thanks to Pierce Brosnan’s turn as Bond, I’ve come to expect seedy, ho-hum love scenes but not so in this film. In fact, the GORGEOUS hapa-Asian Bond girl, Berenice Marlohe, died pretty early on. The one love scene they did have was short, sweet and kind of steamy in a hot-stranger-in-your-shower way.

As an added bonus, we learn how Bond and forever Bond girl, Miss Moneypenny, develop their relationship-that-isn’t-a-relationship. This film also paid homage to the history of Bond and his love affair with cars. Yes, the Jaguar was pretty but I really loved seeing the Aston Martin DB5 from Goldfinger!! That was a pretty awesome treat for all the Bond die-hards out there.

We also are treated to a slice of Bond’s past. If the story of Silva helped endear us to this delightful whack job of a villain, seeing James Bond in his Scotland home and learning about his devastating loss only serves to further cement me in Daniel Craig’s run as James Bond.

All the backstories, the introduction of key characters in the life of Bond, the nod to the original Bond film and allowing us to get to know Bond via his history and the groundskeeper… It’s those moments that really made this movie shine and stand out for me.

Next to Garbage’s “The World Is Not Enough”, Adele singing “Skyfall” is my favorite Bond theme song. It’s sultry, it’s sexy and so…..Bond. I don’t know how else to explain it. No wonder this song is an international hit. Adele’s smoky, rich and throaty voice is a perfect match for the movie that celebrates 50 years of James Bond.

Damaged goods at the core of devastatingly handsome man who’s trained to kill but has tasted and lost the love of his life (“Casino Royale”, anyone?) all wrapped up in a Tom Ford tuxedo? Please, sir, may I have some more?