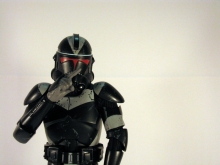 We’ve got a real special treat for you today. Right now, just as this review is going live, the Star Wars 1:6th Scale Utapau Shadow Clone Trooper Figure is just being announced over at Sideshow Collectibles as part of their Annual Spooktacular event. We are really lucky to be one of the sites that has the opportunity to get their hands on the figure before the crowds so that we can tell you just how amazing it really is.

To be honest, when they first told me that they had another Clone Trooper figure coming out, I was kind of “Eh” about the whole thing. There are a lot of Storm and Clone Troopers out there. You could almost build an army without ever buying the same figure twice. However, the Shadow Troopers really are something special. There haven’t been many Shadow Troopers released and there definitely hasn’t been many Shadow Clone Troopers. Any lack of enthusiasm I might have felt towards the figure disappeared the moment I opened the box. 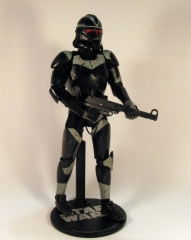 Sculpt: It is pretty easy to assess the sculpt on the Shadow Clone Trooper. It isn’t like they had to do any major creature work or anything like that, but they still did a stellar job on the uniform for the Trooper. They managed to really nail every aspect of the Clone Trooper uniform, while also taking things like battle damage into account. It might be a small detail, but I think that the sculpting shines the most on the hands… The many, many hands, but we’ll get to that later.

Articulation: This is the first Trooper style figure that I’ve had the chance to play with in a few years from Sideshow. When you are dealing with an armored figure like this, it can be really hard to make the figure mobile… or it used to be. This figure was one of the most flexible figures I tested out in a long time, but I guess that 30+ points of articulation will do that for ya. I don’t think I had trouble getting him into any pose that I attempted. If the hands didn’t match up for a weapon in a particular pose, there were many, many hands to choose from.

Paint: Sideshow really deserves some credit on the paint applications for this figure. The Shadow Trooper has a down right menacing look. They could have just painted it black and been done with it, but no, they did so much more. The paint really is what makes these guys look like they have been to hell and back. Almost every inch of the figure shows some sign of battle damage, but it isn’t over the top. It looks like exactly the type of hurt that Troopers would go through in a combat situation. If there was anything that sort of struck me oddly in the paint, it would be the eyes. Don’t get me wrong, they look great… but I can’t see eyes like that and not think Cylon!

Accessories: There are three types of accessories that come with the Shadow Clone Trooper. First, guns. He comes with two guns, a DC-15A Blaster and a DC-15 Blaster Rifle. I’m not really sure what to say about them. Sideshow has always made fine accessory weapons. They still do. I do have to say that I really liked the moving shoulder guard on the DC-15. Next, we’ve got feet. The Shadow Clone Trooper comes with one extra set of feet and I’m glad they do. These “bent toe” style feet are essential if you want to pose your figure in a crouching or squatting position. 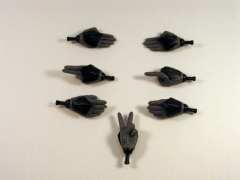 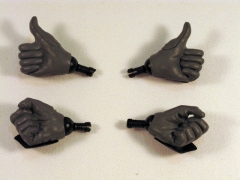