What do you get for the person who has everything? How about a street wise gang member in a diaper with a heart of gold? 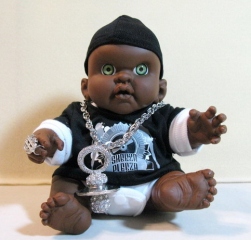 We honestly don’t review dolls here at YouBentMyWookie, but there was just something special about Mezco Toyz’ Gangsta babies that could not be ignored. For those of you familiar with Mezco, this is definitely something that is off the path for them. Sure, they have the Cinema of Fear plush figures which are pretty damn cool, but for the most part we are used to great action figures or over the top smaller dolls like the Living dead dolls. It was a pretty big gamble fore them to make something that looks more like a traditional baby doll, but the spin the put on the idea is one of the neatest things I’ve seen in a doll since Harm The Bunny, a license I would love to see them pick up and have fun with.

Even at first glance, the Gangsta Baby dolls, in this case, Pookie, are different than anything you’ve ever seen. First off, the sculpting on these rotocast dolls is remarkably impressive. It would have been very easy to go for a cartoonish look because of the humorous tone of the dolls, but they went for a completely realistic look and they pulled it off to an eerie level of success. The little pudgy limbs with all their wrinkles and the little pudgy face look very much like a real baby… way more like a real baby than the the dolls my sisters would yell at me for ripping off their heads when I was a kid.

As cool as the actual doll is, the thing that makes it special is all the great stuff that comes with it. Someone over at Mezco is clearly eating their thug life Wheaties because they took accessories very serious on Pookie. For his outfit, he’s got a a thermal shirt, a dew rag, a diaper and a t-shirt that reads “skeeza pleeza”. I want to know where I can get some of those in people size to give out as Christmas presents this year. Along with the clothing, Pookie also comes with some bling. Now, I would have completely understood if the jewelery that came with the Gangsta babies was plastic, but the didn’t skimp. Not only is all the jewelry metal, but it’s pretty heavy duty as well. The coolest accessory would have to be the Blinged out pacifier around his neck. Not only is it metal, but studded with rhinestones. It’s the kind of thing you’d expect to find on Kanye’s kid.