Kenley Collins will face assault charges in which she used a cat as a weapon. 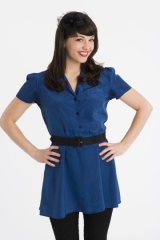 Former “Project Runway” designer Kenley Collins will face assault charges for an attack on her ex-fiance in which she used a cat as a weapon.

According to police reports, Collins, 26, was arrested Tuesday in her Brooklyn home after assaulting her sleeping fiance, Zak Penley, with a laptop computer, apples, water and the cat.

Collins is quotes by The New York Post claiming that “It was a miscommunication” and that “Fights happen, And that’s that. There is no case.”

But law enforcement sources argue otherwise, claiming that “an enraged Collins woke Penley up just after 7 a.m. by hurling their cat in his face. Then she threw her laptop, and as he fell crawled on the floor, slammed a door on his head.”

Collins, the third place loser from Project Runway’s fifth season “was arrested and charged with six crimes — including 2nd degree assault, 3rd degree assault and criminal possession of a weapon in the 4th degree. It is unclear if she will be brought up on animal cruelty charges.”

It’s unclear what started the fight.