It’s the story about love of family, friends and of love lost. These are ties that aren’t easily broken. Love is what drives the Toy Story franchise and I’m sure that’s what will keep it going. 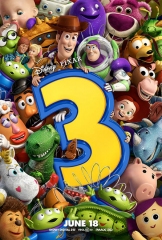 The first installment of this storied franchise (haa haa haa) came out 15 years ago in 1995. I just saw it a few weeks ago. I know….I know….I’m a little late hopping on the Toy Story bus of awesomeness but better late than never. I saw Toy Story and Toy Story 2 on the same day. It was fantastic….AND THEN I SAW TOY STORY 3 TODAY IN 3D!!!!

It’s very rare when I can say I think every new chapter is better than its predecessor (can anyone say “Terminator?” Terminator 2 kicked Terminator 1’s ass but the ones that followed the second one just sucked). Toy Story does not fall into this dreaded trap because the Toy Story movies are truly a gem of story telling.

It has it all. Engaging characters (I feel like they were my own toys even though I know they’re not), continuity in terms of story flow but most of all, it had all the elements of a stand alone story. If my boyfriend hadn’t admonished me for not watching the first two (“What?!!! YOU’VE NEVER SEEN TOY STORY 1 AND 2??!!,” he almost yelled as he shakes his head in disbelief at me, “Babe…how could….how could you truly call yourself a Pixar fan?”), I can honestly say I didn’t have to see the first two to enjoy this one.

In case you don’t know anything about Toy Story 3, here’s a little summary from IMDb and The Massie Twins :

Andy is now 17 and ready to head off to college, leaving Woody, Buzz, Jessie, and the rest of the toy-box gang to ponder their uncertain futures. When the toys are accidentally donated to the Sunnyside Daycare center they’re initially overjoyed to once again be played with, but their enthusiasm quickly gives way to horror as they discover the true nature of the establishment under the rule of the deceptively welcoming “Lotso” Bear. Now, all of the toys must band together in one final, crazy scheme to escape their confines and return home to Andy.

So here’s what I think about the movie. Warning, warning!! Intergalactic planetary spoilers ahead. 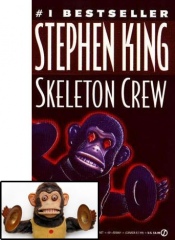 1. Sugar And Spice Plus Some Toys Who Don’t Play Nice

I love Woody and his friends. I think Bonnie (BESTEST NAME E-V-A-R!!!) and her toys are absolutely adorable.

I did not like the toys from Sunnyside. They’re crazy! Omg!! And psychotic! I’m also now very afraid of toddlers.

First you have Lotso. He is the reason why my paranoid ass does not trust anything soft and squishy with the mannerisms of a nice grandpa. I can’t believe I fell for his hug-able charm!! What the hell is wrong with me?! He tricked me!! No wonder I have issues with authority figures.

And then you have Big Baby. * shudder * For some reason, Big Baby reminded me of Chucky from “Child’s Play.” I never liked dolls and those two are the reason why I don’t. There is something very very wrong and evil about things that resemble children. They’re just so sinister! Think about it. In the “Nightmare On Elm Street” movies, that chant that goes “1, 2…Freddy’s after you…” sounds so much creepier because it’s sang by kids! Ugh….and that one messed up eye on Big Baby….. * shudder *

However, nothing was scarier to me than THAT FREAKING MONKEY!!! I am convinced the writers of Toy Story 3 got the idea of using this particular toy from Stephen King’s story “The Monkey.”

Come on. Take a look at the two and tell me THERE IS NO COINCIDENCE THEY BOTH LOOK POSSESSED BY THE DEVIL!

In the Stephen King story, Murderous Monkey kills a nearby living thing when it crashes its cymbals together. In Toy Story 3, Maniacal Monkey sounds the alarm and sends any escaping toy back to….back to….hm….the movie never really said where those toys went after they were caught and we don’t see them any more either. Perhaps Chucky….I mean….Big Baby sent them off to the big Toy Box In The Sky if you know what I mean. Off with their heads! 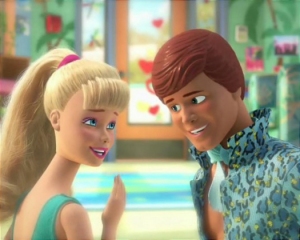 Perhaps this is what makes this movie so magical – it’s multiple love stories. Sure, there’s the kind of love shared by Potato and wife, Buzz and Jessie, Barbie and Ken but that’s not the only kind of love that abounds in this story.

It’s the story about love of family, friends and of love lost. These are ties that aren’t easily broken. Love is what drives the Toy Story franchise and I’m sure that’s what will keep it going, if there’s going to be a Toy Story 4. I cried when I thought everyone was going to die, I cried when the three alien dudes found the claw (I love those little guys) and I cried when Andy left them. Yeah, I cried just about as much as I laughed. I came out of this movie feeling like I went through some diabolical emotional wringer.

Some of the funniest parts of this movie are when Buzz goes into what Jessie calls “Spanish mode.” As sweet and endearing as those scenes were, I nearly peed my pants laughing….or how about when Ken models his outfits for Barbie? “Nice Ass…cot.” I’m pretty sure I turned blue from not being able to gasp in enough air. The part that really made me nearly pass out from oxygen deprivation was Mr. PotatoHead’s ingenious use of a tortilla. That’s all I’m going to say.

All of the Toy Story movies reminded me of “Night At The Museum” because they all come alive. My boyfriend had to remind me that it’s the other way around – NATM should remind me of Toy Story because Toy Story came out first. * sigh * I would’ve picked up on that had I watched the first one when it came out 15 years ago instead of 15 days ago.

Sure, this is a Disney / Pixar movie but you don’t to be a kid or have kids to see this. It’s adult friendly too. Wait, that sounds so wrong but hopefully you know what I mean.

Does no one else also think Toy Story reminds them of another beloved children’s classic “The Velveteen Rabbit?”

I saw this movie in 3D but I don’t think you have to watch it in 3D to fully enjoy this magical movie. 2D is just fine.

What made this movie shine especially bright for me was the name of the little girl who received Andy’s toys. Her name is Bonnie and she not only has a killer imagination but she takes good care of her toys. Did I mention that I think “Bonnie” is the best name in the world? No, I’m not biased or anything.