Review: Dungeon Siege 3 For The XBOX 360 From Square Enix

Join our West Coast Correspondent Chris as he gets lost in the catacombs of Square Enix’s Dungeon Siege 3 for the XBOX 360. 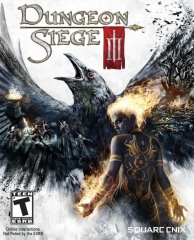 With his work on the great (and hopefully returning) web series, Video Game Reunion, we thought our new West Coast Correspondent, Chris Lorusso would be the perfect fit to check out the new Square Enix release – Dungeon Siege 3. Check out his great review below!

First off I’ve never played a Dungeon Siege game before but I’ve been a fan of hack and slash dungeon crawlers ever since Gauntlet in the arcade. Later in life I found a love for the Diablo series and I’m pretty damn amped for Diablo 3! When my editor said “I got a review copy of Dungeon Siege 3 for XBOX 360, you in?” of course I accepted the challenge. That challenge being of course that I figure out how to write a decent video game review and maybe even come up with my own rating system or some shit like that.

Okay so this game has been fully revamped from it’s earlier counterparts. Square Enix handed the game off to Obsidian Entertainment and said “Yo Obsidian, you guys did a badass job making Fallout: New Vegas (It was pretty awesome though not as good as Fallout 3). Can you fix our humble dungeon crawling hack and slash series and make it cool and fun?” Of course Obsidian replied “Damn Square Enix we’d thought you’d never ask!” After that monumental conversation which took place at a malt shop off the interstate in Ohio, Obsidian was off and running revamping a somewhat flat series. (I’d like it known that in the above conversation the role of Obsidian was played by actor/comedian Rick Ducommun and the role of Square Enix was played by a flap jack. Of course this all pretty much only took place in my brain meats.)

The story (care of Wikipedia):

‘The game returns to the Kingdom of Ehb, which already featured as the setting of the first two games. Roughly 150 years after the events of Dungeon Siege, the 10th Legion, who provided stability and protection for the kingdom for 400 years, has almost completely been wiped out. 30 years before the game’s setting, Jeyne Kassynder rallied the people or eastern Ehb and the Azunite Church against the Legion who she blamed for the death of the king (her father). Following a long and brutal campaign, she managed to kill the entire remnant of the Legion in a battle in the Rukkenvahl Forest and the royalist army of young Queen Roslyn has been driven deep into the mines of Glitterdelve, losing almost all of their power.

A small group of legionaries remained, lead by a man calling himself the Venerable Odo, a former Legion spy. He kept descendants of the Legion safe from Kassynder and, at the beginning of Dungeon Siege III, called them to meet in order to regroup the Legion. The player character arrives to find the meeting place attacked by mercenaries of Kassynder’s. With the help of Marten Guiscard, another Legion descendant, the player tracks down Odo at a former Legion safehouse. After hearing what happened, the player sets out to find other survivors and information on the attacks. After fighting more of Jeyne’s mercenaries, the player travels to Stormbridge City, to reopen the grand chapter-house there. On the way to Stormbridge, they help a group of royalist soldiers fighting Jeyne Kassynder. 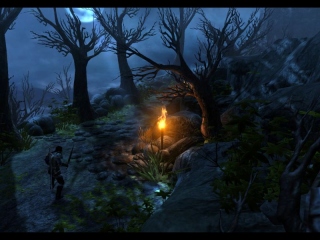 After reopening the Stormbridge chapter-house, the player seeks to enlist the support of the royalists by aiding Queen Roslyn against Jeyne’s assault on Glitterdelve and the help of the City of Stormbridge by helping the Meisters who control the city. Their support ensured, the player attacks Jeyne’s capital, the Spire of Azunai on top of Mt. Jhereb. After winning in battle against Jeyne, revealed to be an archon, a member of a servant race to the lost creator gods, it is revealed that she seeks to use her power to reawaken her long lost gods in the Rukkenvahl Forest. The player travels to Rukkenvahl and fights a mutant god created by Jeyne. After the battle, the player captures Jeyne alive and may render judgment on her, allowing the player to choose the ending.’

Each character has a large connection with the over arching story line of the game and even has a smidgen of personality. Sadly it never really goes beyond a smidgen yet you’re still forced to sometimes have drawn out conversations.

During these conversations you can choose a response and ask other questions which, would be great except that it never really seems like there’s a different outcome. So basically a blind deaf guy’s selections and my selections would end in the same result. This isn’t to say it’s bad it just doesn’t add much to the game and you’ll find yourself skipping them as often as you can.

So as I embark on my quest for fame, riches, and glory I notice that this game takes kind of a while to really get into the story and involve you as a player. You are off to reform the 10th legion and nab a few treasures on your way. The game play’s pretty simplified in a good way for the most part. I choose Lucas the warrior and as you level up you get points to strengthen your moves and build the character you want. This like all RPG’s is part of the core as to why we like them. This game does a good job with it though I found myself wanting just a little more. As in the case of the dialogue scenes it never feels like your decision really matters much. Maybe it was just that I never felt connected to the character I was building due to the generic story line. You have 3 tiers of moves you can select as you get stronger and build them up in different ways. This adds a very small replay value to the game but only true die hard fans will really care about that. 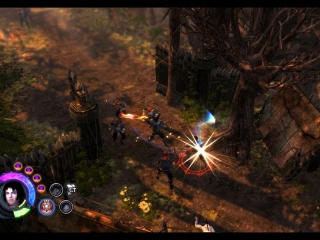 Dungeon Siege 3 is fun, the story line’s generic and pretty bland, the characters are completely uninteresting but, the graphics aren’t bad and at it’s core the game’s a fun update to the groundwork of classics like Gauntlet. You’ll find yourself not caring when the characters are babbling about the prophecies and what the Queen of elder who gives a shit said yet, you’ll forget all of that lame mumbo-jumbo once you’re in a dungeon, forest, crypt, or castle hacking, blasting, slicing, stomping, and bashing in the heads of the unwanted dregs of the kingdom.

The multiplayer is fun either local or online but this is where the games biggest flaw occurs. First the camera locks you in place in a lot of ways by not giving you and your party much room to move. This can get annoying as you will definitely be hit by magic missiles, ice shards, fireballs, and zombie spew from off screen. The other HUGE mistake in the multiplayer is that online you either start a game of your own or join someone else’s and take control of his/her AI character. You aren’t able to have your own character and collect your own loot unless it’s your game and in that case anyone playing with you can’t collect loot for themselves. This is sort of the root of multiplayer dungeon crawling and with everything else Obsidian revamped and fixed up this truly should have been higher on their list.

Okay, so you’re powered up and you’re fighting trolls, mutants, evil flying things that are a bit harder than they should be, and giant ice beasts! With all my mild whining is the game fun? Yes, it’s not Diablo at all but it is fun. If you’re looking for a game that can hold you over till Diablo 3 than this is the one to do it. It may not be to Blizzard standards but it’s a fun dungeon crawler that you can bring a friend or two along with and hack up some monster meat.

I give this game 7 out of 10 Wookies. It’s far from perfect but with friends it’s fun lay siege across the land of Ehb.

For more information on this game please check out the Square Enix official website. (http://www.dungeonsiege.com/)