Adventureland, Greg Mottola’s latest teen flick, is both foreign and very similar to Superbad, which involves an over abundance of teen boozing, pot smoking and “sexual intercourse.” 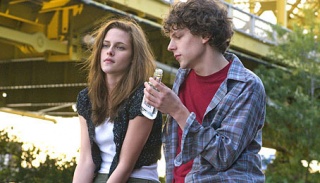 Adventureland, Greg Mottola’s latest teen flick is both foreign and very similar to Superbad, his previous, film which involves an over abundance of teen boozing, pot smoking and “sexual intercourse.” Yet surprisingly absent however is the McLovin over-the-top raunchiness of his first film. It is perhaps not very accurate to say that Adventureland is a realistic portrayal of angst teens in the late 80s, but it certainly is much more subdued and views like a slice-of-life story reminiscent of early John Hughes film, if not inspired directly.

The year is 1987, James Brennan (Jesse Eisenberg) is a twenty-something youth about to embark on a European adventure of a lifetime filled with foreign culture and cute French girls entirely subsidized by his parents. Sadly, financial hardship has befallen the family and his parents tell him that they can no longer fund his trip, let alone graduate school in the fall. Desperate, strapped for cash and not even suitable for manual labor, James finds himself stranded in Pennsylvania working a dead-end minimum wage job at a run-down, self-professedly “fantastic” amusement park known as Adventureland. Oh the irony… or is it?

What started out as seemingly the worst summer of James’ life instead turns into quite an adventure when he meets and falls in love with Emily “Em” Lewin (Kristen Stewart), a fellow game booth attendant who saves him from a knifing over a giant-ass-panda. Additionally, he finds himself connecting with other employees in the desolate hell of Adventureland filled with spoiled corndogs, repetitive disco songs (one of the funnier moments in the film) and systemically rigged games where customers aren’t suppose to ever win a giant-ass-panda. 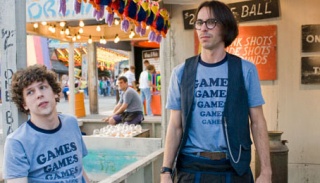 While the movie revolves around James and Em, other Adventureland employees play a series of roles facilitating the plot. Everyone from Joel Schiffman (Martin Starr) the pipe-smoking, Russian literature major who also works as a game booth attendant, to Frigo (Matt Bush), James’ obnoxious childhood friend who has a thing with punching him in the family jewels. As well as Lisa P. (Margerita Levieva) the park’s most coveted disco dancing beauty and Connell (Ryan Reynolds), the mysterious rock and roll park handyman.

Although Adventureland is listed as a comedy, truth be told, it’s rather somber and savagely depressing at times. Cue scenes with Em. Cue scenes with Joel. Cue scenes even with Connell. That’s not to say the movie isn’t funny or that this is a depressing movie (hardly the case). There are actually a handful of laugh-out-loud moments, especially the scenes with Bobby (Bill Hader), Adventureland’s owner and his faithful yet odd wife, Paulette (Kristin Wiig).

My criticism with this movie is two-fold. First, none of the characters are really likeable. In fact, most appeared fairly spoiled and pampered — all with the exception of Joel who is probably the only likable character in the entire movie. I’m not sure if this was done intentionally by Mottola, but there was a scene between James and Joel where the audience had a chance to see the difference in how Joel and James lived. And at the end of the scene, Joel tells James that “he’d never understand” what it’s like to be him, to not be good looking or rich. 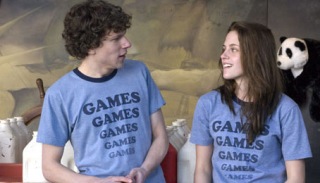 My second criticism is with the scripting of the characters age. Everything felt awkward and out of place, like children pretending to be grown ups and failing miserably at it. The characters are supposedly in their early twenties and are either going to college or have already graduated, yet for whatever reason they have the maturity level of high school seniors or worse, high school freshmen. To me, this felt like poor scripting as the story would have worked better if they had all been college virgins haven’t yet experienced the real world. James for example is highly impressionable and clueless, despite being sincere enough to want to wait for the right situation and the right girl before having “sexual intercourse.” To me, that is not the sign of a soon-to-be grad student or even contemplative thinker that the character himself claims to be. Instead it is an insult to the real life graduate students who are penning their dissertation as we speak.

Overall, Mottola’s Adventureland is an average film lacking heart with some glaring flaws that limit it from ever standing out or becoming memorable. What it is is a wannabe coming of age film. Self indulgently drafted and not as good as it could have or should have been. Is it entertaining? Sure. Is it watchable? Definitely. Does Kristen Stewart appear naked? You’ll have to watch to find out. In the end is Adventureland really any fun? Not really.