The humor is very much the same from “The Hangover,” but this time the boys are in Thailand and I lost count of how many penises were shown in the movie… 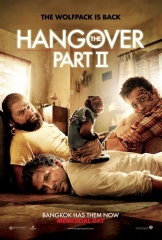 ”If at first you don’t succeed, try, try again.”

That seems to be the mantra of the world’s most infamous Wolfpack made up entirely of men. After laughing my ass off watching “The Hangover”, I could not wait for the second installment to this classic. Helllooooo, Bradley Cooper.

In case you were out of the country and have no idea what this movie is about, here it is in a nutshell courtesy of IMDb.com :

Right after the bachelor party in Las Vegas, Phil, Stu, Alan, and Doug jet to Thailand for Stu’s wedding. Stu’s plan for a subdued pre-wedding brunch, however, goes seriously awry.

Sounds pretty tame, right? Stu seems to be the only one who learns from his mistakes the first time….unless he’s drunk and high from ingesting whatever mystery drug Alan slipped into his drink / food. Poor Stu. He really tried to have the world’s tamest (and lamest) bachelor party by hosting a brunch at IHOP. Can’t say the man didn’t try.

Here’s a taste of what sets the tone for the movie :

The writers probably figured the first one was such a hit so why bother fixing what obviously isn’t broken. Smart writers. We’re taken on yet another crazed scavenger hunt with the Wolfpack in the beautiful and exotic Thailand. I’m pretty sure they picked Thailand because its capital, Bangkok, was just too befitting phonetically to pass up.

The humor is very much the same from “The Hangover”. Alan, being Alan, slipped a little something extra into the marshmallows at the bonfire. Actually, I thought Alan was quite an asshole. Before, I thought he was just amusingly insane. In the first 30 minutes of the movie, I thought he was a jerk. Poor Teddy!

Another love – MR. CHOW!!!! Mr. Chow is back and in full force. I actually think he stole the movie. He is so funny!!! The man has no shame…and I also saw way more of him than I ever needed to. Good God…

Another thing I loved about this movie was the reappearance of Mike Tyson! The man can’t sing (please don’t bite my ear off) but you gotta give him an A for effort.

There wasn’t very much that I didn’t like about the movie. It’s a popcorn piece so I don’t see any reason to take it too seriously. If I had to pick something, it would be that it was like they regurgitated the script from “The Hangover”, swapped out Vegas for Bangkok, added a monkey and Ang Lee’s son to the mix. Then again, this isn’t really a con to me because, again, if it ain’t broke, don’t fix it.

They probably also figured “Hey, people had such a reaction to us showing a very brief glimpse of Ken Jeong’s penis in the first one….LET’S SHOW THEM MOAR IN THIS MOVIE!!!” 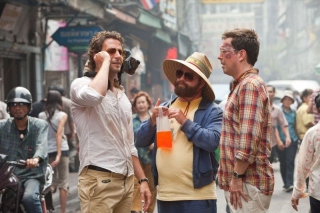 You know the song “Miss New Booty” by Bubba Sparx and The Ying Yang Twins? If you don’t, the opening lyrics go “Booty booty booty booty rock`n everywhere”. In the case of “The Hangover 2”, it was more like “Penis penis penis penis flyin everywhere”. I lost count of how many penises (what’s the plural for penis anyway? Is it ‘penii” or is it “penises’? Oh, the things I never thought I’d have to think about if I weren’t writing for Wookie) I saw in the movie.

I saw ones that were mistaken for mushrooms thanks to Ken Jeong. And thank you, writers, for writing in the part where the monkey plays around with it and the extreme closeup. No, really. Thank you.

I was hoping that would be the only one I would see but, again, we’re in Thailand – land of the Lady Boys. Before you think I’m hating on the transsexuals, I’m not. I’m just jealous because they usually look better than women do. * sigh * Anyway, so Stu apparently has a thing for strippers / prostitutes. That’s right. Stu had hot, monkey love with a Lady Boy. We were also treated to a full frontal of his favorite lady boy’s junk…and the junk of her friends. That was a lot of sausage in a very short period.

Oh, yeah. They gave a severed finger to the drug dealing monkey. Yup.

– Overall, I enjoyed the movie. I feel like I’m hanging out with a bunch of my really slow friends who just never learn their lesson.

– I really think they took the success of “The Hangover” and sat around asking each other “How do we top this? I know! Let’s make it better by making it RAUNCHIER!!!” And then all the writers high fived each other around the pitchers of beer they were downing.

– I love Mr. Chow. He is THE MAN!!! “I’m an international criminal, it always ends like this. I met my wife in one of these things.”

– I have an idea for “The Hangover 3”. Alan’s the one getting married (he’s the only one left) and he refuses to have a party without Mr. Chow so he goes to break him out of prison with the help of the wife (I think it’d be awesome if she was some crazy awesome lawyer and that’s how Chow met her. It’d be too lame if she was a hooker or drug dealer). I haven’t worked out the details yet but I think it could work.