Just like the Pillsbury Dough Boy or Iron Man, Barack Obama has earned his place in history as an action figure 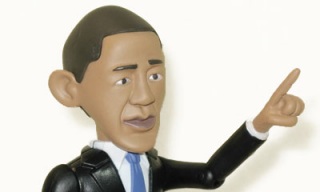 Some people have called Barack Obama a rock star, others have called him the Messiah, and others still have called him things that I probably shouldn’t write here. The point is, whether he wins or loses in November, he’s become more than just a politician, he’s an icon and a viable commercial brand. So, just like the Pillsbury Dough Boy or Iron Man, Barack Obama has earned his place in history as an action figure. The company making him, Jailbreak Toys, is a supporter of Barack Obama and is donating one dollar from the sale of each figure to his campaign.

This is another one of those toys that doesn’t really require a very long review. The figure is made of vinyl, which is a bit of a switch for action figures, but I think it is something you’ll start seeing more from smaller companies. just the fact that it is vinyl makes it more collectible because it not only draws in the action figure and political fans, but also the vinyl art crowd.

The figure features eight points of articulation and a likeness that, depending on who you ask is either a cartoonish homage, or slightly insulting. To those who find it insulting, get a new hobby. It is clearly Obama. Sure, his ears are even bigger than they are in real life and his head is just a little be extra cone-shaped, but you can just chock all that up to artistic license. After all, if they are giving money to his campaign, they can’t be trying to mock him too hard.

The paint on the figure is pretty good. I’d give it an 8/10. there’s a couple little scuffs and rub marks, and somep laces where it goes outside the lines a bit, but that’s vinyl. In the end, you have a decent action figure. He’s very posable and actually holds his poses a lot better than I would have expected. His white suited version is already sold out. Depending on how the vote goes in November, he’ll either be a highly sought after collectible, or something you find in your attic 20 years from now.