When I was growing up, the family board games came off pretty lame. Occasionally you had something like “Clue” which played like a mystery novel. The common ones were always about getting rich by buying property, trying to start a family, or traveling to an absurd world where kids climbed ladders and slid down chutes. These safe games didn’t offend anyone, but they lacked a certain amount of excitement. They were literally “bored” games. 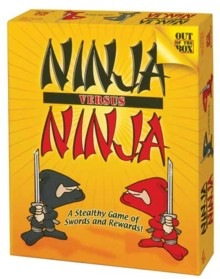 “Ninjas versus Ninjas” by Out of the Box Games is a rare attempt to break that family friendly mold. Most of their products consist of party games that are fun for Christian teens looking to do something after their Youth Group meetings. However, in Ninjas vs Ninjas, the goal is to kill your enemies before they kill you.

The concept is pretty straight forward. Two players take control of the red Ninjas, or black Ninjas. The goal is to send one Ninja into the enemy’s dojo, and if he returns unharmed after three turns then you score points on how deep you stealthily infiltrated your opponent’s home base. If you get 8 points, you win the game. If your Ninja fails to return to your home base, then he dies. You can use your imagination on how that works. Maybe your ninja is performing an honorable suicide after failing his mission? Perhaps there are ninjas in the shadows that seize the opportunity to kill him before he can make it back to his own dojo? Whatever happens, he failed to put points on the score board, and the result is death. 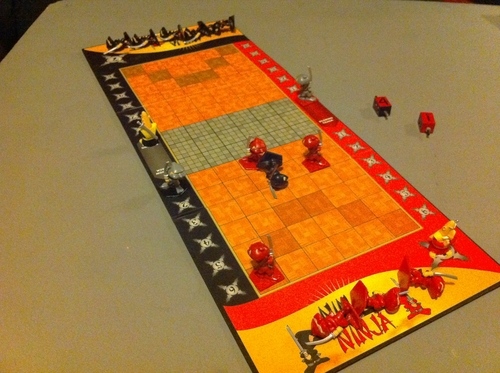 If you are trying to score points is too hard, you can always try an alternate strategy; taking out your opponent in a brutal and bitter confrontation. You can only achieve this by landing on an adversary’s space, but only if you reach it with the exact number you rolled on the dice. You can only turn, or go backwards once. Although it’s an easy concept, the game can involve a lot of strategy. Movement is restricted just enough for the player to decide whether to attack or retreat. Its chess and backgammon rolled up into one with katana blades.

The accessories in this game are detailed and finely crafted. The dice are four sided, and appropriately have swords through them. This game doesn’t mess around; you’re killing people with every move. The pawns look terrific too. They aren’t plane Jane pawns from the game “Sorry”; these are Ninjas…if they were envisioned by the Artist who did Ziggy comics. Nonetheless, they are pretty well sculpted and painted. The board itself is straightforward but pretty impressive. The Ninjas are lined up to resemble a traditional showdown. Your Master pawn is off to the side surveying the battle, guiding his students from afar. Meanwhile, the shadow ninja moves the opposite direction and keeps track of how much potential points a side may or may score in a single round. The only thing missing is the gallons and gallons of blood that is spilled when these two armies clash swords. 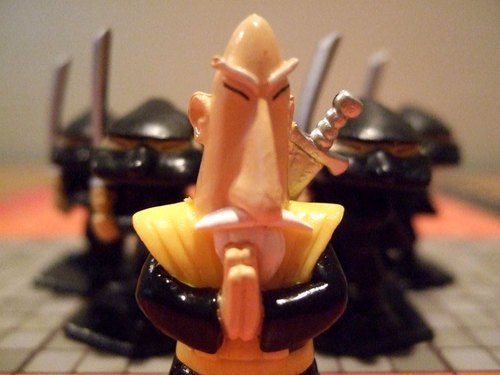 This is a game I wish was around when I was a kid. I wanted to be a ninja skulking in the shadows, finding ways to dismember my opponent. I didn’t want to see how many “bugs” I could extract from some guy’s bed with a pair of tweezers. There is nothing appealing about acting out the game of Life at such a young age. Battleships that don’t have the ability to take evasive action after getting hit shouldn’t be commissioned to be sea worthy. If my parents came up to me as a child and asked, “hey it’s raining outside, let’s play a board game. “ This is the one I would have picked. Draw your sword, and get ready to throw down. This isn’t Candyland, its Ninjas vs. Ninjas. Your fate is determined through stealth, cunning and how far you can insert your blade in the other guy’s chest.