A historical period piece about the Wall Street of China intertwine with a love story and your not so typical Asian girl. 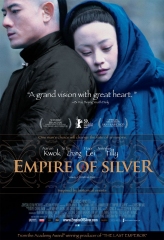 I had the pleasure of attending the premier of Christina Yao’s directorial debut “Empire of Silver”. I didn’t know about this gem’s existence until my friend, Paul Nakayama, posted the trailer on Facebook. I love Chinese historic pieces so I was more than happy to hit “play”. That initial happiness blew into outright fan girl mode when I saw none other than AARON KWOK ON MY SCREEN!!!!

Don’t know who Aaron Kwok is? He’s known as one of the four “Heavenly Kings” in Asian media. I listened to a bunch of his music when I was a teeny bopper. He was so hot….and still is. Loooooking goooood!!! Anyway, once I figured out he’s the male lead, I really really really needed to see this movie.

I accompanied my girl friend to the premier in Culver City on June 1st and was blown away. A little under 2 hours later, I could see why she won Best Director in China for this film. Before you start thinking this is some kind of historic kung fu movie, I need to let you know it isn’t. It’s a love story at heart but it’s also much, much more.

Here’s a much better way to sum up the movie :

China,1899. In a land of exquisite beauty and timeless tradition a young man known as ‘Third Master’ is the heir to a banking fortune he cares little about. However, after his brother’s wife is kidnapped he reluctantly submits to the pressure of his title and his father, Lord Kang.

Lord Kang is determined to prepare his son for financial leadership by molding Third Master into his own image. But the strong-willed businessman’s methods do not sit well with Third Master, who sees the salvation of his business in following the righteous path of his ancestors.

Third Master and Lord Kang’s tense relationship is further complicated by the son’s feelings for his beautiful young stepmother — his first and only love — stolen from him by his own father.

The fate of the banking empire and its most powerful family now lies with one idealistic young man torn between the needs of the people, the duty to his family, and the undying love of a woman

Where do I start? So many things impressed me about this movie but I’m going to start with the woman at the heart of the love tug-of-war. Warning! Warning!! Spoilers ahead!! 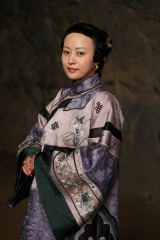 Not Your Typical Asian Girl

Succession of family and lineage is a very strong theme in this movie. You can’t have kids without a woman and such was the lot of the role of women. Christina Yao brings this to light but with a twist. Madame Kang (played by the beautiful Hao Lei) is very much her own woman. She is strong enough to bend but not weak enough to break.

Her true love is Third Master (Aaron Kwok’s character) and is introduced to the family under the guise of being the tutor to Master Kang’s four sons. Her true role was to serve as Third Master’s concubine but in an insane twist, Master Kang takes her for his wife instead. So, instead of marrying her true love, she has to marry his dad….and is expected to give him more sons….which means they have to have sex.

You’d think she’d do what most people were doing in China during those days to escape her reality – smoke opium. Nope. Instead, she battles Master Kang every way she possibly can to assert her control over not just herself but her own destiny. I won’t totally give it away here but suffice it to say it was pretty brutal. My girl parts are still hurting. She’s my hero.

Jennifer Tilly is also beyond awesome. I really liked her character, Mrs. Landdeck, the missionary’s wife. She seems to be the only friend to the lovely, but lonely, Madame Kang.

I didn’t think I could take Jennifer Tilly seriously in such a serious film but I am happy to say I was so wrong.

You met one player in this bizarre love disaster. Time to meet the others. 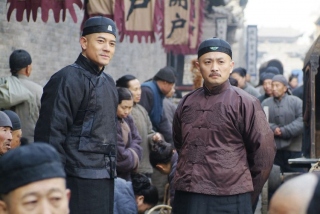 Third Master is the 3rd son of Master Kang. He’s also the least favorite. Master Kang is the dad. Their relationship is also pretty strained. There’s a definite struggle to be both a dutiful son but to also adhere to what you know is right.

Master Kang is head of the one of the most powerful banking families of the time. The Shanxi merchants lived by a strict Confucian code of conduct that prized integrity and fairness in addition to regulating sexual conduct. For example, a Shanxi merchant was forbidden by their code to divorce, have a concubine or visit brothels.

Imagine that…honor within the banking system. Whatever happened to that in our current day, I wonder. I think the present has a lot to learn from the past. Anyway, I digress.

Master Kang, to me, is a straight up gangster. Come on. Who else hoards salt only to sell it off once the asking price has doubled because of rampant illness spreading through the country from salt deficiency? Can you name any other kind of person who would teach their heirs how to exploit man for your gain? What other kind of person would advise their sons to use fear as a way of controlling others and make sure they are beholden to you forever more? Dictator comes to mind….but so does the image of a mob boss.

Third Master, on the other hand, is what I like to think of as the unicorn. You know. That mythological creature countless people swear up and down to exist but no one has actually seen? Why do I think that of him? He’s an honest businessman who believes in taking care of the customer and will empty his own family’s vaults of silver to pay back his clients. He’s a man who believes in being decent and embodies the values of the Shanxi merchants. This is a man who always asks the question “Am I doing the right thing” and strives to always do just that. His daddy? ….not so much.

This isn’t to say Third Master was always awesome. Nope. He was a hard core party boy (by the standards of those days) but has since seen the light. One of my favorite lines of the movies was “Doing business is no more than conducting oneself.”

No wonder Madame Kang loves him. 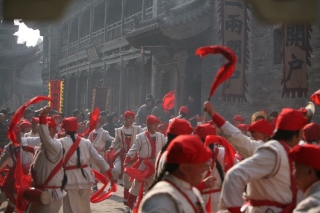 If I could use only two words to describe the visuals of this movie, I would have to go with “authentic” and “gorgeous”. The movie was shot entirely on location spanning 4 provinces and 13 counties and cities throughout China. All those buildings you see in this piece? They are all real structures that have managed to survive and all of them are considered museums.

Great care was put into this film not just by the crew but by the private collectors and various museums who willingly parted with their treasures. Almost all of the props used in this movie are real antiques. The men’s costumes were made but all the little touches (jade pendants, jade buttons on the hats, rings, etc) are all antique artifacts.

The lavish costumes and jewelry the ladies wore were also pieced together using new materials and antique accessories.

This is what truly stunned me about this movie. I felt like I really traveled through time. I’ve watched more than my fair share of Chinese period films / TV shows / music videos and I can honestly say most of those not only looked cheap but also pretty hokey.

“Empire of Silver” is in a class of its own because only true pieces from this era could ever give such an ambitious film the lush polish of authenticity.

Did I mention how many awards this movie won? No? I’d list them all but that would take up a lot of space so I’m going to pick out my favorites.

Long list, right? These are only my favorite ones. There were more.

So who is this director who won over so many people? Christina Yao, director and producer of “Empire of Silver”, holds a Ph.D from Stanford in Asian Theatre. She has also has attended schools in both Taipei and other parts of the US. She’s an acclaimed short story writer, playwright and critical essayist in addition to being published in the United States, France and Taiwan. Talk about awesome credentials.

Jeremy Thomas is the Executive Producer of “Empire of Silver”. In case you’re wondering where you’ve seen his name before, he’s the guy who produced “The Last Emperor” and “Fast Food Nation”.

– In case you’re thinking all this stuff about honor among thieves bankers is nothing but fiction, Christina Yao gives a real life example of what it meant to be a member of the piao hao (the Chinese precursor to the modern day banks) :

One example that might be useful to illustrate what they had to adhere by: There was an Englishman in the 1960s who got a large sum of money deposited into his account in Hong Kong. He wasn’t sure what that was about so he looked into it and found out that his grandfather was in business with a merchant from this same Shanxi school, and the business failed.

That merchant, on his deathbed, said to his family that if ever the family is able to resurrect its glory, they have to return the money. So two generations
later, they return the money. Nowadays, I would say that’s unheard of. What’s important is that it’s not just that the grandfather was loyal to his code, but two generations after him also were loyal to the code.

That illustrates how these merchants saw themselves. I think that is something that we don’t have anymore.

– China’s Shanxi region was dubbed as “The Wall Street Of China” by Sterling Seagrave in his book “The Soong Dynasty”. The piao hao controlled the finances of the nation of China much like how Wall Street controls the ebb and flow of finances in the United States. I didn’t know this but piao haos were the inventors of a system of money transfer much like how we wire money today. Crazy, huh?

– Those giant abacuses used in the movie were actually made to scale using measurements from the existing one in a museum’s collection. Wow.

In theaters nationwide as of June 3rd, please check your local theater for movie times or go to Empire of Silver’s homepage for more information.