It kind of makes me hope that Gentle Giant will announce a set of Fight Club busts. If you see a Tyler Durden bust on someone’s desk, steer clear… 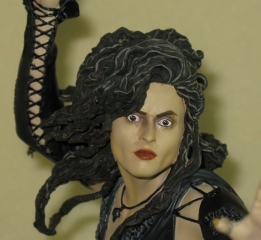 The statues from the Harry Potter line are nice, it’s the busts that brought the fans to Gentle Giant in the first place. One of the newest pieces to join the collection is Bellatrix Lestrange. So let’s have a look.

First thing out of the box that you notice is the likeness. She’s a dead ringer for the actual actress. Some people think that Gentle Giant cheats by using a combination of laser scanning and sculptors to capture likenesses. I say, who cares? whether it is based in tech or classic style, it still took skill and talent to bring it to life. As a collector, I just want a great statue or bust that actually looks like the subject. Helena Bonham Carter is a pretty unique woman to start off with… even before you turn her into a witch. That said, they absolutely captured her from her eyes to the shape of her lips. It kind of makes me hope that Gentle Giant will announce a set of Fight Club busts. If you see a Tyler Durden bust on someone’s desk, steer clear.

Moving on from the face, there’s still a lot of great detail to check out. The hair looks fairly natural… you know, considering it’s a statue… and the hands are chock full of detail including gnarled fingernails and a nicely detailed little magic wand. When you move down, you get to what is probably my favorite part of the statue, the outfit. The sheer amount of detail and varying texture that carries all the way down the bust until it intersects and overlaps with the standard stone base makes it worth having on your shelf. This is a great piece.