Let’s just say I’m already waiting for the next installments of “The Amazing Spider-Man” with Andrew Garfield. 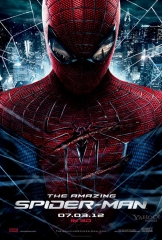 The 4th of July saw me slack jawed in a dimly lit room. It’s not what it sounds like. I was at the movies and watching “The Amazing Spider-Man”. My mouth was open during most of the movie because :

1. It was action packed.
2. Emma Stone is GORGEOUS.
3. All the flying around via Spidey-Vision (that’s what I’m calling the camera angle that let me feel like I *was* Spider-Man) really had me thinking “I can FLY!!!” It also kind of made me dizzy at times but that’s okay!
4. Andrew Garfield is so cute.
5. It was one helluva movie.

In case you were tangled in a sticky spiderweb and have no idea about what the movie is about, here’s a little synopsis taken from PR :

Warning! Warning!! Spoilers up ahead!

What A Tangled Web We Weave

Don’t hold it against me when I say I don’t really follow the adventures of the world’s favorite spider bitten boy. I know the very very basics and that’s about it. However, my lack of knowledge regarding Peter Parker’s escapades didn’t hinder me in following the story. Yes, I know it deviated from the traditional comic book storyline but I liked this version better.

Ignorance, in my case, was bliss because I felt like this was a great introduction to Peter, Aunt May, Uncle Ben and who Peter was prior to Mary Jane in terms of his love interests. Again, I know this deviates from the comic books but the reason why I like this better is because it ties up loose ends for me. When Gwen’s dad died as a result of the battle with Dr. Connors, it showed how far Peter’s come in terms of keeping his promises the best he could. I liked that. I also liked how he tried to still be there for Gwen too.

If you see this movie, make sure you stay after the main credits roll. There’s an additional scene that hints at a sequel.

Thanks to YouBentMyWookie, now I know there will be two more installments. This is great!

Another reason why this movie really set itself apart from the Spider-Man movies featuring Tobey Maguire is how it delves into how Peter evolves as a result of his parents and their missing presence. Most of the world knows Spider-Man as the photographer for the newspaper who also happens to be able to scale buildings with nothing more than his body….and that he wears a costume that doesn’t leave much for the imagination.

That’s great and all but I’m the kind of person who likes to know the “how” and the “why” behind the character. I think this movie did a great job of that.

I didn’t like the Spider-Man movies when Tobey was playing Peter Parker. While I think Tobey did a good job, I just didn’t particularly like the movies. He didn’t make Peter Parker come alive for me. I also don’t like Kirsten Dunst. More on that later.

1. He’s got that gawky, gangly, emo, geeky, super nerd, dork thing going on.
2. He does a great job portraying a typical teenage boy in love with a girl in all its angst-y, awkward glory.
3. He looks GREAT without his shirt on. I’m pretty sure a ton of girls wanted to be Emma Stone when she was tending to his cuts.
4. He’s not ripped. He’s kind of skinny. That just adds to the dorky, nerdy guy thing but he’s got some muscles on him too.
5. He did a great job with the dialogue, like when he was taunting Dr. Connors at the school during their epic battle.
6. Andrew as Peter is a shy, sweet, mischievous young man….who just so happens to have super powers.

Tobey…Tobey’s Spider-Man just fell flat for me. I stopped watching after the first Spider-Man with Tobey but it’s not entirely his fault.

Kirsten Dunst is the primary reason why I couldn’t bring myself to watch any more Spider-Man. I can’t believe they cast her as Mary Jane, the pivotal love interest of Peter Parker! She’s not cute, she’s not pretty and she always looks like she’s about to fall asleep. When I watched the movie, I kept hoping she would get killed off but knew that wouldn’t happen because she’s freaking Mary Jane and Spidey would always come to her rescue. * sigh *

Emma Stone, on the other hand, is BEAUTIFUL! She totally kicked ass as the smart, girl-next-door. I loved her character. She’s got some balls, sticks up for the people who get picked on, she’s smart and she looks AWAKE AND ALERT, not sloppy and sleepy.

Too bad Emma Stone isn’t Mary Jane. I’m curious to see how her character is going to play in the next Spider-Man movie.

On a side note, does anybody else out there think that Emma Stone is what Lindsey Lohan could have been? They have the same look and yet their careers couldn’t be more different. Emma Stone is in major blockbuster movies. Lindsay Lohan plays a woman (Elizabeth Taylor) who was in blockbuster movies for a Lifetime movie. Just sayin’. Moving on.

1. I cannot Cannot CANNOT wait for the next installments of The Amazing Spider-Man with Andrew Garfield.
2. Who was that guy in the cell with Dr. Connors? And did Dr. Connors develop some psych issues at the end?
3. I feel bad for Dr. Connors because all he wanted was his arm back….but, man, what a wrong way to go about it. Crazy scientists should always be played by actors with British accents.