Touch that X and You’ll be Eating My Blade!

Greed is a powerful tool. People love to acquire things for their own personal amusement. It’s not a question on whether they have any use for it. It’s all about the bottom line; “I need to have it all”. It’s a habit you learn well while growing up as a kid. As you age, you learn that that requires work. Not just a little work, a LOT of work. It’s one of those life lessons if instilled as a child, might have made you a better adult. Enter the game “Pirates vs. Pirates”. It teaches children to satiate that greed muscle through hard work and determination.

The Pirate is the epitome of avarice. They take what they want, or (and) they cut your throat. Occasionally Pirates are seen as thrill seekers, and romantic adventurers, but greed keeps a Pirate going. These guys are forever linked to hunting down treasure on obscure maps, and taking that booty to pay for booze, hookers, and even more hookers. And that’s what P v P is all about. The map is laid out for up to three players. The treasure is in the middle. The player’s pirates have to recover the treasure, and move the exact amount of spaces needed to land on their raft so they can run away with their bling. If a player takes two silver pieces, then they win the game. Victory can also be achieved If a player takes the single gold piece. It’s a race to the finish to see who is the greediest. 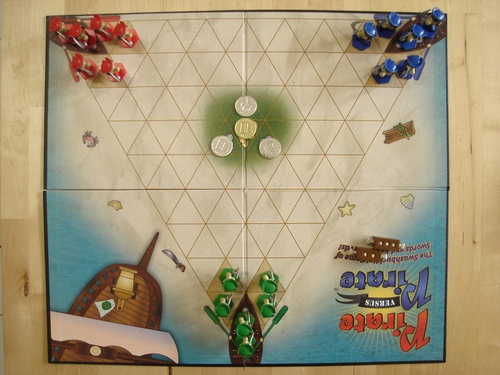 These pirates are armed and won’t give up treasure without a fight. If a pirate ends their movement on an occupied space of an opposing enemy, he kills that him and takes any coins that happen to be in their possession. Consequently, if you kill all the pirates of all opposing players, you’ll win the game. This is the kind of blood thirstiness you don’t see in kid’s games. The pirates don’t go to a place where they’re held momentarily, they snuffed it, and you get to pick their corpse clean of any treasure. 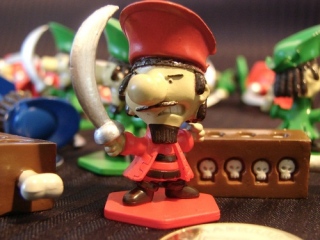 The map is divided up in triangles instead of the traditional squares or hexagons seen in other games. You can only move through the flat sides of the triangles. You can’t move into space that you’ve already been on. If a pirate can’t move the entire movement that the dice roll provides, then that pirate can’t move. More than one Pirate can’t occupy the same space. Although the movement is a bit restrictive, it works for the strategy of the game. You may be able to get the last gold piece, but you’ll find it pretty hard to roll the exact number needed to reach your raft. Like I mentioned before, you have to use every strategic piece of brain matter in your head to obtain all the cash monies.

Parents, this is an excellent game to play with your kids. But I’m going to give you a word of advice; don’t let them win easily. Make the little turds win on their own merits. Don’t give them a false sense of victory; teach them if they want something they have to earn it. If they want to be the one counting their riches with a slut at their side, then they have to climb the ladder of success just like everyone else. Trust me, it’ll build character.