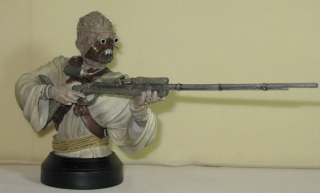 Before Gentle Giant grabbed the hearts and wallets of Harry Potter fans, they were already part of the die hard Star Wars fan’s monthly budget. Their busts and statues have been some of the best ever created. What’s more, they seem to keep getting better and more inventive as the line continues. That is exactly the case with the new Tusken Raider bust.

This is one of Gentle Giant’s famous two-way busts. You can swap out the arms and weapons. You can even swap out the head to give you an entirely different statue. In one pose, he holds a long rifle while he looks down the site as he prepares to shoot some wayward passerby on their land speeder. Then, for a total change, you pop out the head and arms and swap them out to display a victorious Raider, posed with his arms up in the air and waving one of the nastiest clubs you’ve ever seen. I think its called a gaderffii…

When you get past all the little bonuses that Gentle Giant put in the Tusken Raider, you still have a typically well crafted Gentle Giant bust. Likeness for the character is just dead on. They got the colors and textures perfectly. They were able to capture the unique techno mummy style of the headdress. They even managed to get all the detail on the weapons. If you like Star Wars…you know, the real not the crap CGI one… then there’s a good chance you’ve already placed your order. If not, grab it before it sells out.