Check out our great new interview with Writer/Director/Star Dan Poole along with a review of his indy Hero flick, ‘The Photon Effect!’

In a time where ‘indie films’ have budgets in the multi-millions of dollars, it’s always a wonderful surprise to see good, true independent films. Dan Poole is known to some for his popular fan film ‘Green Goblin’s Last Stand.’ There’s such heart invested in that you can’t deny the charm or his love of superheroes.

So, fast forward a bunch and Dan decided to undertake a huge feat: to make a super hero film on a very low budget. Thus was born ‘The Photon Effect’.

Dan’s superhero love shines in ‘The Photon Effect’. What really works in this little superhero picture is the story. It’s a simple, yet utterly classic origin story for any good hero worth his weight in superpowers.

Synopsis Courtesy Of IMDB:
‘During a freak accident involving an experimental microwave antenna, two tower engineers gain superhuman abilities. While the powers they gain are similar, the paths they decide to take are not. Derek Powers wants to use his abilities to help others and uncover the truth behind Randall Communications Incorporated (RCI), the company who designed the antenna. Meanwhile, Jay Powers secretly becomes part of the experiments performed by RCI, whose lead scientist, Tina Viccarini, is a former love interest of Jay. This series of events ultimately leads to the birth of a new superhero and supervillian.’

I had a chance to catch up with the films director and star Dan Poole:

YBMW: What was the first comic you remember from when you were young?
DP: The earliest comic book I have a memory of is a Flash from my Dad’s stash of DC stuff. I remember him banging some dude’s head off a curb about a thousand times, which left an impression on me. He was also running through different dimensions. Very cool concepts for an 8-year-old mind to consider.

YBMW: Who were your favorite superheroes?
DP: I gravitated toward Spidey as a kid because of the climbing, gymnastics, web swinging and smart mouth – all things I related to. Well, rope swinging, anyway. I think Captain America ranks #2 for me because of his ideals. The idea of taking pride and representing where you are from on any scale is something that has resonated with me my entire life.

YBMW: What got you into filmmaking?
DP: I have always been an extravert and storyteller, and my goals out of high school were to be an actor and stuntman. In the late 80’s I got wind of the efforts in Hollywood to make a Spider-man movie and began looking for a way to create some kind of demo reel. At 19 I was working at The National Aquarium in Baltimore, where I borrowed their A/V gear to make a funny video for a colleague’s farewell party. It got a lot of laughs and someone in the crowd said, “you’re a pretty good Director” – and the lightbulb went off. I began shooting as much Spidey stuff as I could and never stopped. I just switched costumes. :) 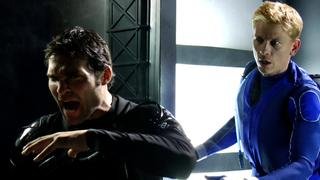 YBMW: What made you initially to decide to make fan films?
DP: I began making my Spidey videos well before the term, “Fan Films” was ever conceptualized and about twelve years before the internet made it’s way into everyone’s home. My work was always for the sole purpose of landing any sort of job on the set of a Marvel superhero movie. Although, it has been pointed out to me that since I only ever intended to use a few quick cuts of The Green Goblin’s Last Stand toward that goal, that I just wanted to play out the fantasy of being Spider-man for the other 49 mintues. Whatevs! Could be, but hey – I’m not a psychologist.

YBMW: What was the push that made you create you’re original super hero feature?
DP: The push was year after year of realizing that I was never going to work at Marvel Productions. I finally decided that if I couldn’t play with someone else’s toys I would have to make my own. It was hard, but the truth is that no matter how awesome Fan Films can be (not that mine were, mind you), there’s not much you can do with them in a legal or practical manner. Did I just say, “I grew up”?!! I didn’t mean to!! Dammit!! I think I just meant that it was time to create something I stood a chance of marketing and distributing myself.

YBMW: What’s your favorite scene of the the photon effect?
DP: My favorite scene is between the two characters when they begin to argue about who is right. I remain proud of the writing and think it is performed quite well also. It’s very dynamic and really the heart of the whole story.

YBMW: What was the hardest part of the film to shoot?
DP: Gotta say the scene where Photon finally stops the motorcycle thug and reacts to him being arrested. It took me over one year to figure out – and be okay with – the idea that it couldn’t be done the way it was written. Because of that one scene, we officially wrapped in September of 2008 INSTEAD OF May, 2007. What’s REALLY f’d up is the fact that the most difficult part to shoot – we didn’t even shoot! It’s all done by my character’s reaction to sound effects! gggrrrrrrrrrrrrr………..

YBMW: What are you happiest about and what makes you cringe at when you re-watch the film?
DP: Always going to be astounded at how well the top of the tower scenes are composited with the green screen. It couldn’t look any more like the area where the actual towers are. Cringe? Well, the running effect, of course. Absolute disaster, there.

YBMW: What comics are you still reading?
DP: Sadly, I haven’t collected any books in years. I’ve looked several times but the prices are unbelievable to me these days! When I download some to read on the iPad, my interests always fall toward Iron Man, Captain America, The Hulk, Thor and other Marvel big boys. Am I bucking in the stalls for The Avengers movie or what?!!

YBMW: What new projects do you have in the works?
DP: My biggest project remains getting The Photon Effect in front of as many earthlings as I can. However, I may have the opportunity to direct another superhero genre project that I wrote a few years ago if everything falls into place. Beyond that, I have started writing something that I plan to produce sometime within the next year. It has absolutely nothing to do with superheroes or special effects! It’s a bit of a comedy set in Baltimore that I have aspirations of being this generation’s “Diner”.

We really want to thank Dan for not only letting us interview him, but giving us a chance to review ‘The Photon Effect’. 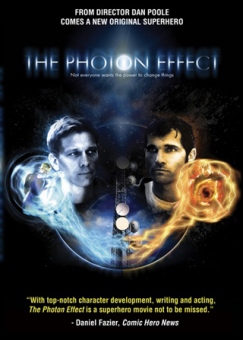 Film Review
The hyper-realistic world of ‘The Photon Effect’ is all about pure superhero fun. It plays out like an old school Marvel comic, I’d even compare it to the old ‘Hulk’ TV show with way better special effects but a lot less Lou Ferrigno. Well, absolutely no Ferrigno was in this film but that’s ok. I don’t compare it to the ‘Hulk’ in a bad way at all, I embraced Dan’s love for classic comic storytelling and how easy it is in his world for the best and worst man to accidentally get superpowers.

The superheroic destiny plays like a charm. We get to know the leads pretty well. Derek and Jay are cousins that grew up together but took different paths in life. Honestly, I liked Derek and felt bad for him when he realized his cousin was turning into a super villain, I know it’s incredibly operatic but it really works in the film At time the effects can show the budget constraints, the super speed effect is definitely lacking, but many of effects in the very ambitious project are well done and never pull you out of the story.

Some lower points in the film would have to come from the acting, while the two leads Derek and Jay are great together, many of the supporting roles can really bring down a scene. This isn’t to say it’s all bad but you can really feel it a few times when Derek confronts the evil company man, who you almost hear how proud he is of himself for just remembering his lines and where to stand. Not trying to put the man down for not being a professional actor but sheesh some of his scenes do stink up the movie, luckily he’s not in it much.

This title’s worth a watch it really has heart and keeps the old ‘Make Mine Marvel’ spirit alive in the best way. If you love superheroes and have a soft spot for the old schoolers of the comic world then check out ‘The Photon Effect’. 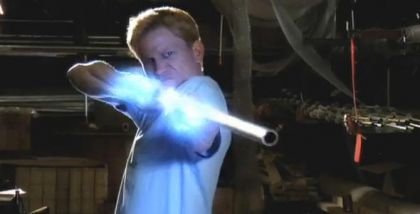 CP Lorusso works in the film biz in Los Angeles and likes spaceships.
He can be reached at CPL[ a t ]YouBentMyWookie.com or on
Twitter @CPLorusso.