Every company says they produce detailed collectibles, but through the Iron Man Mark III, Hot Toys Shows that everyone else is in the minors and they’ve already won the world series. 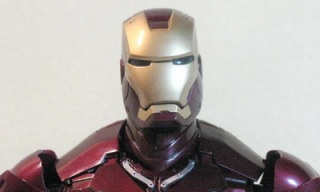 Hot Toys is hands down the heavy weight champion when it comes to the world of 1/6th scale figures. Sure, Sideshow does a good job, but even they know that Hot Toys rules… why else would they be distributing for them? I still remember the first Hot Toys figure I ever reviewed. It was Rambo. The detail was unlike anything I’d ever seen. The articulation and accessories were phenomenal and then there was the skin. It wasn’t just a hard plastic, it was a relatively realistic textured latex. It was one of the few moments I ever really developed a fanboy crush on a toy company. Now a couple years later I had the pleasure of getting to review their Iron Man Mark III figure and, well… HOLY CRAP.

Not to go overboard or anything here, but this is just about the closest I’ve ever seen to a perfect toy in my life. Every company says they produce detailed collectibles, but comparatively, they are all minor leaguers while Hot Toys has already won the World Series.

You want to talk details? Let’s start with something simple like alternate head featuring the likeness of Tony stark/ Robert Downey Jr. The thing is darn near photo realistic. How about the paint? It was spotless. They created a metal-like finish that gave a realistic look to the piece that I haven’t seen anywhere else…

The articulation that I remembered from back on that Rambo figure is here in spades. Stuffed into the 30 centimeter frame was over 36 points of articulation. This actually leads me to the only slight complaint I have. While the base for the figure is awesome. It cradles the figure instead of just wrapping around its waist. If only there was a way to extend the front of the cradle you could really take full advantage of the articulation and set Iron Man up in some seriously awesome flying poses. Ever time I tried, he fell over. That said, arms, legs, ankles, toes, you name it and you can fuss with it on this figure and that doesn’t even include the armor.

Let’s start with something simple about the armor… It lights up! Sad as it is, three things that will always make me happy are: Metal, sharp things, and lights. Iron Man Mark III has 1.5 out of 3. I’ll give it the half point because of the metallic finish. The lights however are just plain awesome. Not only do his heart and eyes light up (in the helmet, not on the Robert Downey Jr head), but the repulsor rays in his palms light up too. Just the eyes and heart would have been enough, but going the extra mile on the hands is what makes this just a great figure. Speaking of the hands… the figure comes with three different sets for you to interchange.

That should be enough for any figure, but the more I explored it the more detail I discovered in Iron Man’s armor. The mobility in the shoulder armor was very impressive. The articulated flaps in the arms and legs were not only cool, but showed great detail beneath them. Just look at the pictures of the back of Iron Man’s Legs. You can see every wire and piston that goes into making his feet work. Then just like a cherry on top of the world’s greatest sundae, you can pop out his forearm missiles just to remind people what a bad ass he is in the heat of battle.

There’s not really a lot more I can say about this figure that hasn’t already been said. If you loved the movie Iron Man, or the comic book, or are even just Robert Downey Jr, this figure is a must own. Don’t worry about the price on this one either. Sure, it’s more than you’ll pay for anything made domestically, but the quality of the figure is so high that you can actually justify the price tag.