Final Fantasy XIII might just be the most controversial Final Fantasy games that has ever been released. Thankfully, Square-Enix does more than make great games, they also make good toys. 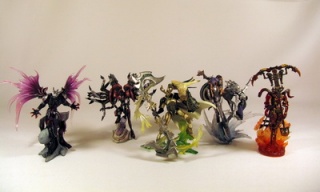 Final Fantasy XIII might just be the most controversial Final Fantasy games that has ever been released by Square Enix. It seems like people either loved the game or hated it, but no one can deny how sweet the Eidolons looked in the game. It’s amazing to see how characters like Bahamut and Odin have evolved throughout the series. Thankfully, Square-Enix does more than make great games, they make the toys that go along with them. The recently released the Final Fantasy Creatures Kai Vol. 3 and it is a must for fans of the game or just fans of the amazing character design that square has become known for. The PVC collectible set includes: Bahamut, Hecatoncheir, the Shiva Sisters, Odin and Brynhildr.

Overall, the set is pretty fantastic, but as it is made up of so many parts, we are probably best served by looking at each one of the 4″ figures on their own. Also, make sure that you check out the complete gallery below for detailed close-ups! 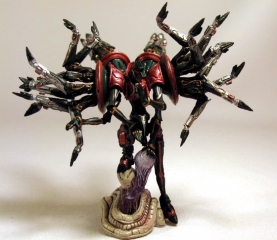 Hecatoncheir
The Hecatoncheir figure actually made me laugh a bit at first. The color and design reminds me a lot of an old set of two Spawn robot figures that fit together to make one mega-monster. This piece shows off just how amazing Square is when it comes to crafting small collectibles. Given the number of arms and little details, it would have been very easy for them to dumb down the design for PVC. Thankfully they didn’t. From the base to the tendrils, the detail makes this figure stand out in the set. It also contrasts stylistically with the other figures. With the exception of the Shiva Sisters, there are no figures in this set that even come close to going the Mecha route. It is extremely cool. 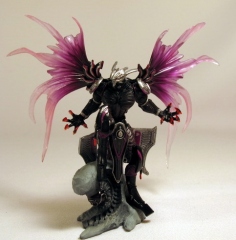 Bahamut
Bahamut has always been a favorite Summon for me from the older Final Fantasy games. It is great to see how he’s evolved here. Like Hecatoncheir, he’s got tremendous detail, especially int he face and wings. I love the gradient shade on the wings, it kind of goes from dark to translucent and is done well. As it should be, Bahamut is the most menacing in the appearance from the set. He’s probably also the simplest when it comes to detail, but the design and paint applications make for a seriously bad-ass addition to your shelf. 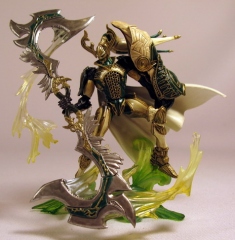 Odin
To me, Odin has that sort of special old-school, fantasy anime bad assness to him. Once again, they did a great job creating these bases for each figure that give them a very ethereal quality. Next to Bahamut, I think that this Odin figure is the one I’d like to have as a 12 inch statue. Along with the Shiva Sisters, they’ve been able to capture a good bit of motion through the energy flow and the cape design. This is a super hot figurine! 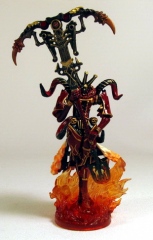 Brynhildr
Brynhildr might be the single piece in this collectible set that I’m most conflicted about. On the one hand, he has this awesome flaming base and a costume design that is straight out of Evangelion meets the Marquis De Sade. On the other hand, it looks like they kind of phoned it in on his face. If I was buying these figures individually, I’d probably leave this one on the peg, but he’s a solid addition as part of a group… maybe just not a figure who gets front row on the shelf. 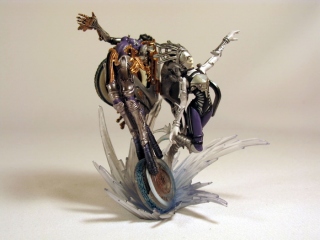 The Shiva Sisters
Double your pleasure, double your fun with this great PVC of the Shiva Sisters. There is so much going on in this figure that I’m not even really sure what to say. Amazing design. Ridiculous amounts of detail on the wheels and armor. Any complaints that I had on Brynhildr’s face are more than made up for on the work they did on the sisters. I want to see this figure are a 20 foot fountain… I’m not sure if that makes sense to anyone else, but that pretty much just sums up how I feel about it.

I guess the only thing left to look at is the packaging. there have been a lot of great strides in toy packaging in recent years. I’m just not feeling it from the folks over at Square though. It’s a fine box, but it isn’t going to hold up in the long term. The good news is that this isn’t the kind of set you are going to want to keep in the box anyways. There’s so much detail that you want these out on a shelf where you can pick them up and turn them all around. At this price for great set of PVCs like this, you’d be stupid to keep them cooped up in a package.