Punch is perhaps best known for her role in the television show Doc Martin and as Eve Draper in the Simon Pegg/Nick Frost comedy “Hot Fuzz.” 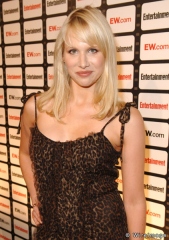 Last week we reported that child actress Baliee Madison had been cast as Calista (AKA young Retro Girl) in the small screen adaption of Brian Michael Bendis and Michael Avon Oeming graphic novel “Powers.” Today we have found out that English actress Lucy Punch (Dinner for Schmucks, You Will Meet a Tall dark Stranger) has landed the led female role as homicide detective Deena Pilgrim in the series.

As much as I like Lucy Punch, I can’t agree with the casting because Deena was always portrayed as a small firecracker where as Punch is nearly Amazonian in stature. That’s not to say I was in favor of the popular choice of BSG’s Katee Sackhoff, but someone smaller in statue probably would have suffice. Now if only we could get John Barrowman to play Detective Christian Walker.

The pilot episode will be written by Charles H. Eglee, and directed by Michael Dinner. The story is set in a world where superheroes are just a part of life. It centers on two detectives, Christian Walker and Deena Pilgrim (Punch), in a Homicide department that deals with cases involving superpowers.

The series starts shooting in Chicago this summer.

Punch is perhaps best known for her role in the television show Doc Martin and as Eve Draper in the Simon Pegg/Nick Frost comedy “Hot Fuzz.”