We finally had the chance to check out the new Tron toys and see if they were truly as awesome as they looked behind the glass at Comic-Con.

First thing’s first, as the new Tron Legacy toys are just hitting the market now, I want to thank Spin Master’s most excellent Brand Manager, Eric Phan, for hooking us up with a couple samples to check out and see if the the new Tron toys were truly as awesome as they looked behind the glass at Comic-Con. The two toys we got to check out were the Deluxe Clu Action Figure and Kevin Flynn’s Light Cycle.

Tron Legacy Deluxe Clu Figure
I wanted to start with this one because, as much as I love anything even remotely light cycle, I’ve been really interested in getting my hands on one of these figures so I could try out the “impulse projection” feature. 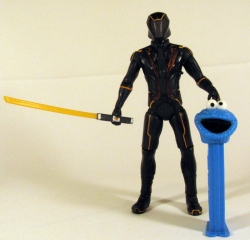 Let’s start off with the sculpt on this figure. Let’s be honest, it is not the most complex sculpt in the world… After all, the figure is wearing a motorcycle suit and a full helmet, so it’s not like they have to deal with the face or anything like that… That said, the Motorcycle suit looks great. it has some really nice detailing in it and the sculpt and paints are very clean. It also lights up all through the body, but we’ll get to that in a minute.

When it comes to articulation, I was quite pleased. I was able to get clue into just about any position I wanted. I never had any trouble making him stand and the joints were all firm enough to hold position, but not so stiff that I was worried I might snap something.

There are only two accessories with the figure, but they are more than enough. You get the Katana and the all important identity disc. not only do they both have decent detailing, but they fit easily into Clu’s hands. I found the trick to the disc is that there’ a little notch that helps you also store it on his back. When you put the disc in his hand, make sure that one of the fingers slides into the notch. It makes for a much better fit.

OK, now let’s talk about what makes this thing super cool… the Impulse Projection thingy. I don’t know how it works, and I’m not going to crack his head open to find out, but it is pretty slick. You see, instead of sculpting a head on the figure, they actually project it inside the helmet. When the figure talks, and it has a lot of things to say, the face changes enough that it really does give the impression that the figure is talking. I could see this being limited to helmeted action figures right now, but it is awesome. Also, as an extra bonus… whenever Clu talks, the yellow stripes on the front of his outfit light up. AWESOME! 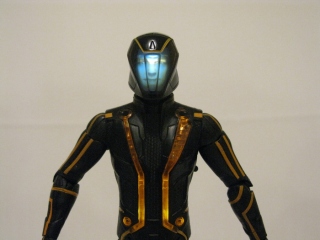 To sum it up, The Deluxe figures from the Tron Legacy line are insane. They are just getting ready to hit the shelves and with the movie hitting close to Christmas, I’d get your butt out and find them now because you will not be able to find them come December.

Kevin Flynn’s Light Cycle
OK, I’ll always have a place in my heart for the original light cycles, but if you can’t admit that the new ones are cool than you are lying, and possibly have a visual or mental impairment of some kind.

The first thing that you need to realize when you get these light cycles is that the figures we just talked about DO NOT fit inside them. If you want a figure inside it, grab one from the core figure line.

This is one of those vehicle toys that has such a slick design that it went immediately from my review table to the shelf where I keep my batmobiles and my Ecto-1. You can’t not have these cycles on display. The sculpt is filled with smooth clean lines, the wheels roll nice and smoothly and the hinges on the cockpit canopy don’t give you any problems.

Just like the figure, this light cycle also lights up. To make it light up, either press the panel near the rear wheel or slide a figure into the cockpit.

All in all it is a great piece, if there was one thing I’d like to see there that isn’t there already, it would probably be the engine sound. I only say this because I know how important the engine sound is in the movie and how much trouble they went through to make it work with the Daft Punk soundtrack. 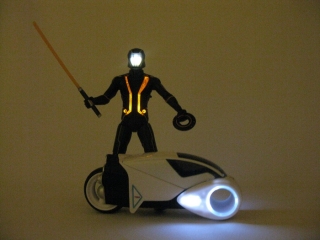 Either way, this is another one that will be impossible to find on the shelves when the movie comes out so go and grab them now.