Cartoon Network has unveiled their new block of DC animation properties for TV and Online in 2012 called DC Nation. 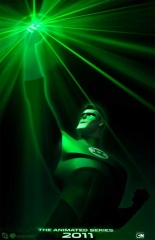 Cartoon Network has unveiled their new TV line up and block of DC animation properties for TV and Online in 2012 called DC Nation. According to Diane Nelson, President of DC Entertainment, “DC Nation on Cartoon Network will be the first-ever dedicated broadcast destination to showcase the depth and breadth of the DC Universe.”

“We and our partners at WBTV are thrilled that fans will be able to immerse themselves in DC’s phenomenal stories, experience a wide spectrum of amazing characters and stay up-to-date on the latest happenings of the world’s greatest superheroes and their creators, both on-air and online.”

Here’s a list a description of all of the new series coming to Cartoon Network, which includes ThunderCats, Green Lantern, How to Train Your Dragon and the new Looney Toons reboot.

The Problem Solverz: Created by celebrated artist Ben Jones, The Problem Solverz presents a fresh, distinctive visual style and tone in a new series that follows three crazy young dudes, Horace, Roba and Alfe, the proprietors of an unorthodox detective agency dedicated to solving the mysteries of the universe, one case at a time. Slated to premiere Monday, April 4, at 8:45 p.m. (ET/PT).

Secret Mountain Fort Awesome: From Pete Browngardt (Chowder), Cartoon Network Studios presents a hilarious new comedy about a mega-rad group of monsters that live underground and do crazy awesome stuff like steal the sun, fight CGI-sharks, and get their butts kicked by a velociraptor. Plus they wrestle! See, it’s awesome, right? But remember, it’s a secret. Shh!…premiering this summer.
The Amazing World of Gumball: Dad is a 6’4″ pink rabbit who stays home while Mom works in the rainbow factory. Their children include Gumball, a blue cat with a giant head; Anais, a 4-year-old genius bunny; and Darwin, a pet goldfish who became part of the family when he sprouted legs. The eye-catching animated series combines 2D and 3D animation techniques in a live-action setting and originates from Cartoon Network UK. The Amazing World of Gumball premieres Monday, May 9 at 7:30 p.m. (ET/PT).

Level Up: After high schoolers Wyatt (Gaelan Connell), Lyle (Jessie T. Usher), Dante (Connor del Rio) and Angie (Aimee Carrero) unwittingly open a portal from a video game into the real world, characters from the game and internet start leaking into the real world. The group now finds themselves balancing their everyday lives with the extraordinary things that show up in their town. Level Up is created and written by Derek Guiley and David Schneiderman(both credited for Chasing Liberty) and executive produced by Peter Murrieta (Wizards of Waverly Place, Hope and Faith).

New Ben 10 Series [Title TBD]: Ben 10 has been one of Cartoon Network’s most successful original series since first premiering on the network in January 2006. The franchise has since spawned four animated series, one animated movie, two live-action movies, a widely-popular consumer products line and has captured the imaginations of viewers on a global scale.

ThunderCats: The re-imagined animated series based on the beloved 80s classic tells the tale of a hero’s epic journey to fulfill his ultimate destiny. On Third Earth, the kingdom of Thundera is being threatened by the evil sorcerer Mumm-Ra and young heir to the throne Lion-O embarks on a great quest to take his rightful place as king. The unlikely champion, joined by his faithful comrades Tygra, Cheetara, Panthro, WilyKit, WilyKat and his loyal pet Snarf, must work together to save their world from darkness.

Green Lantern: The Animated Series: Based upon the DC Comics super hero, the series is an all-new CG animated action series from Warner Bros. As Earth’s Green Lantern, Hal Jordan is used to being in dangerous situations—but he’s never faced anything like this! Set at the farthest reaches of deep space, Hal must face down an invasion from the Red Lantern Corps. Hal is soon joined by an all-new group of heroes on a mission to protect Guardian Space —and the Green Lantern Corps itself!

DC Nation: A multi-platform, branded block of original programming and exclusive content based on the DC Comics library of legendary character properties, DC Nation is developed in partnership with Cartoon Network, Warner Bros. and DC Entertainment. The all-new venture will harness the publishing, theatrical and television assets together for one powerful on-air block on Cartoon Network with exclusive online content.

How to Train Your Dragon: Based on the book by Cressida Cowell, DreamWorks Animation’s new series rolls fire-breathing action, epic adventure and laughs into a captivating and original story. Hiccup is a young Viking who defies tradition when he befriends one of his deadliest foes—a ferocious dragon he calls Toothless. Together, the unlikely heroes must fight against all odds to save both of their worlds.
Total Drama: Revenge of the Island: It’s back to the island where Total Drama began for an all-new season with an all-new cast! Since Chris took the show worldwide, Camp Wawanakwa has been abandoned and turned into a toxic nuclear waste dump—the perfect place for a new season of painful, cringe-inducing challenges! Fighting for the million dollar prize are thirteen wild new players.

RedaKai: Conquer the Kairu: An animated kids adventure series stars Ky, a 15-year-old student of ancient martial arts who embarks on an incredible quest to find the Kairu, a primordial alien energy force. Helped by his friends Maya and Boomer, Ky travels the globe looking for the Kairu to protect it from his extraterrestrial teenage opponents, with the hope that one day he will become the greatest Kairu warrior of them all–a Redakai.

Lego Ninjago: After a time of peace in Ninjago, our four Ninja heroes are about to face a new dangerous enemy. Lloyd Garmadon, son of their archenemy Lord Garmadon, has unleashed a new evil with unique powers. Soon his ambition to follow in his father’s footsteps has put all of Ninjago in jeopardy.