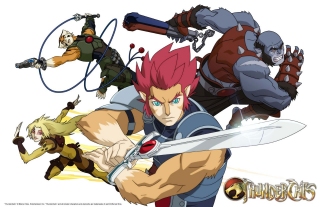 ThunderCats, one of the most beloved cartoons of the 1980s and a continuing cultural force, comes to Cartoon Network in an all-new contemporary reimagining of the iconic animated series. Set as an epic tale, ThunderCats tells the story of a hero’s journey to fulfill his ultimate destiny. The series begins with an hour-long special premiere event on Friday, July 29, at 8 p.m. (ET, PT). Following the premiere, the show will air regularly on Cartoon Network Friday nights at 8:30 p.m. (ET, PT) beginning August 5.

Mark your calendars accordingly folks! Still unsure whether you should watch? Watch the trailer here and then kick yourself in the face. Thanks!

Thunder, Thunder, ThunderCats! Ho!! On Third Earth, the kingdom of Thundera is being threatened by the evil sorcerer Mumm-Ra, and Lion-O, the young heir to the throne, embarks on a great quest to take his rightful place as king. The unlikely champion must work with his faithful comrades Tygra, Cheetara, Panthro, WilyKit, WilyKat, and his loyal pet, Snarf, who join him on his journey to save their world from darkness. From Warner Bros. Animation (WBA), ThunderCats is executive produced by Sam Register (Teen Titans, Ben 10, The Looney Tunes Show), with Michael Jelenic (Batman: The Brave and the Bold, Wonder Woman) and Ethan Spaulding (Avatar: The Last Airbender) producing.

To celebrate the premiere, ThunderCats will have a significant presence at Comic-Con International: San Diego. A panel scheduled for 3:30 p.m. on Friday, July 22 in room 6A will include an exclusive screening of the hour-long series premiere. Producers Michael Jelenic, Ethan Spaulding and art director Dan Norton will participate in a subsequent panel discussion and answer questions from fans. Coinciding with Comic-Con, Cartoon Network will also air nine episodes from the classic ThunderCats series over the weekend of July 23. Boomerang will also host a classic ThunderCats marathon on July 16 and 17 and air the series every day at 5 p.m. starting Monday, July 18.

Cartoon Network digital adds to the ThunderCats experience with online content including the free game, “Thundera Run,” launching on CartoonNetwork.com July 18. Additionally, a free “Party Pack” from Warner Bros Animation will be available for download and will include everything a true fan needs to host the ultimate ThunderCats viewing party.