An inside source has recently leaked some new details about Anne Hathaway’s Catwoman costume in Christopher Nolan’s “The Dark Knight Rises.”

Anne’s outfit is more tactical, like the comic book, than the previous Batman movies. She will definitely be wearing the goggles and it’s going to be less sexy than Halle Berry and Michelle Pfeiffer’s Catwoman costumes. She’s going to look more like a robber….But fan boys shouldn’t be worried. This costume is going to be form-fitting enough to make Anne look smoking hot….Everything from the looks in her eyes, her head movements, her body–everything is so feline. The role is taking her to new places

I always kind of figured Nolan would go with the modern Jim Lee look as it’s the most practical, not to mention real world applicable. But there’s only so much one can do with Catwoman that I’m skeptical (very much similar to SJo’s Black Widow in Iron Man 2) . Sure, I was blown away by Ledger’s transformation into the Joker, but can Nolan really pull off magic twice? Hathaway is going to look like Hathaway no matter what, Catwoman won’t have any masking agent to do a full face transformation like the Joker.

There’s no doubt Hathaway will be able to bring the feline sexiness needed to pull off an amazing Catwoman, and despite my cynicism and skepticism I still can’t wait to see how it all comes together in the end. 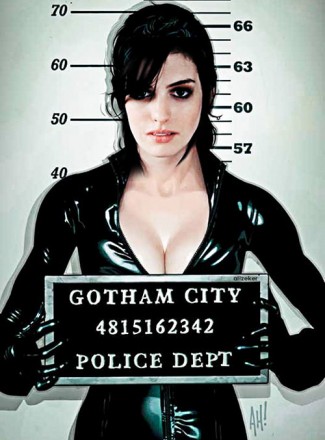 Could this artist interpretation possibly be how Hathaway will look?