The next Cosmonkey series will appear on phones, laptops and tablets everywhere on JULY 25, exclusively on Edwards’ twitter feed.

Earlier this summer, filmmaker Cory Edwards (Hoodwinked, Fraggle Rock: The Movie) planted a flag in a new medium: THE FIRST EPISODIC TWITTER SERIES. The story of space chimp “ROGER COSMONKEY” was told in single TWEETS, or “TWITTERSODES,” each with a SINGLE IMAGE attached. Since every good idea deserves a sequel, he’s doing it again. The next Cosmonkey series will appear on phones, laptops and tablets everywhere on JULY 25, exclusively on Edwards’ twitter feed.

“This was an experiment – not only in new media, but in storytelling,” said Edwards. I had a good time doing it and it found an audience. So I want to keep it going.” Edwards saw his follower count triple in two weeks and is on the radar of media watchers such as Entertainment Weekly. “It’s a limiting format, but that’s also what makes it a fun challenge,” Edwards continues. “This next adventure has a bigger story and better artwork. And where the last series spoofed a lot of invasion movies, this one spoofs a whole new genre. Let’s just say Roger goes up against something worse than Sharktopus.”

The series will unfold over ten days, two tweets a day, only @RealCoryEdwards.

THE STORY: In 1968, NASA lost a test chimp in deep space. In 2011, “Roger” returned, highly
intelligent and pissed off. After decades of space adventures, he and his crew of forgotten NASA
animals sue the U.S. government for millions. Now living in a mansion in the Hollywood Hills,
Roger’s lust for life constantly gets him into trouble. And this time, the trouble is MONSTROUS 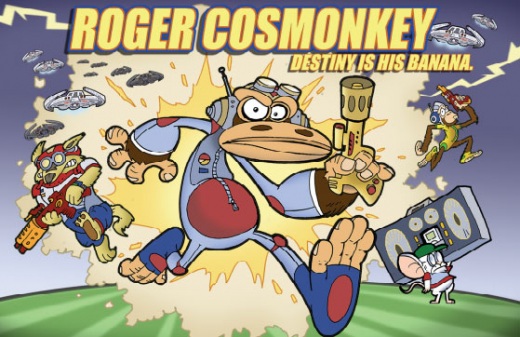