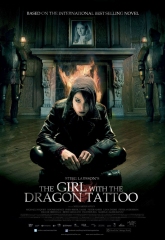 Daniel Craig is reportedly in talks to play reporter “Mikael Blomkvist,” the leading male role in David Fincher’s US adaptation of Stieg Larsson’s thriller-mystery novel “The Girl with the Dragon Tattoo.”

Several sources are saying that Sony and Craig are nearing a deal for the part. A part that once was attached to Brad Pitt. While no official offers have been made, we believe Craig would be outstanding for the role.

“The Girl With The Dragon Tattoo” is the first part of a trilogy, and it’s believed that if Craig is on board, he’d also sign up for all three pictures, just as Fincher has already done. The film is about a reporter/journalist Mikael Blomkvist who recruits Lisbeth Salander, an eccentric female computer hacker to help solve a 40 year old mystery about a missing woman.

A variety of actresses, including Carey Mulligan, Keira Knightley, and Natalie Portman have expressed interest in playing Salander. But no one has been signed yet.

The movie is scheduled to begin shooting in October, and has a tentative release date of December 2011. Fincher will begin production after he is finished with “The Social Network.”

If Craig signs, he’d have a busy year ahead of him having already committed himself to Jon Favreau’s upcoming “Cowboys & Aliens,” Jim Sheridan’s “Dream House,” and Steven Spielberg’s “The Adventures of Tintin: The Secret of the Unicorn.”

Personally, I think Craig is perfect for the role as he also looks similar to the original actor Michael Nyqvist who played Mikael Blomkvist in the Danish film adaptation which was released last year. The Danish adaptation also starred the amazing Noomi Rapace as Lisbeth Salander. The film is currently playing in the states and it’s a film I highly urge everyone to check out. The movie poster for the Danish adaptation is included up at the top.

Here’s a complete synopsis from the book:

It’s about the disappearance forty years ago of Harriet Vanger, a young scion of one of the wealthiest families in Sweden . . . and about her octogenarian uncle, determined to know the truth about what he believes was her murder.

It’s about Mikael Blomkvist, a crusading journalist recently at the wrong end of a libel case, hired to get to the bottom of Harriet’s disappearance . . . and about Lisbeth Salander, a twenty-four-year-old pierced and tattooed genius hacker possessed of the hard-earned wisdom of someone twice her age—and a terrifying capacity for ruthlessness to go with it—who assists Blomkvist with the investigation. This unlikely team discovers a vein of nearly unfathomable iniquity running through the Vanger family, astonishing corruption in the highest echelons of Swedish industrialism—and an unexpected connection between themselves.

It’s a contagiously exciting, stunningly intelligent novel about society at its most hidden, and about the intimate lives of a brilliantly realized cast of characters, all of them forced to face the darker aspects of their world and of their own lives.