Nickelodeon and Dark Horse comics are teaming up to bring the Emmy-winning animated series back as a comic. 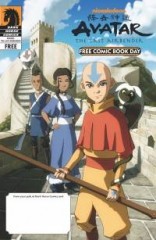 If you’re a fan of the original Nickelodeon series “Avatar: The Last Airbender” then I have some good news. Nickelodeon and Dark Horse comics are teaming up to bring the Emmy-winning animated series back as a comic. Fans will get their first taste this May 7th at Free Comic Book Day (FCBD) with two short stories and the never before published Relics. It will soon follow with an all new 240 page comic featuring unpublished material as well as long out of print Nickelodeon comics. All of this will eventually lead into an all-new series that’ll continue the further adventures of Aang and his friends as they help rebuild the world torn apart by 100 years of war.

﻿The Hit Series Returns To Comics This May As Part of Free Comic Book Day!

MILWAUKIE, OR – Feb. 2011 – Following the breakout success of last year’s Avatar: The Last Airbender — The Art of the Animated Series, Dark Horse is proud to collaborate with Nickelodeon on a comprehensive publishing program built around this beloved and exciting Emmy-winning animated series!

The first installment of this new series will be released on Free Comic Book Day, May 7, with two introductory short stories — including the unpublished tale “Relics” and the iconic Dirty Is Only Skin Deep… This free comic will be packaged with Lucasfilm’s Star Wars: The Clone Wars in a special flip-book comic, available only at your local comic book shop.

Avatar: The Last Airbender — The Lost Adventures will be released TK. This all-new 240-page comic book contains over 70 pages of never-before-seen material in addition to long-out-of-print comics previously published in Nickelodeon Magazine. With 26 stories set in Airbender continuity and created by a host of top-notch talent, many of whom worked on the original animated series, this is an essential addition to any fan’s bookshelf.

Additionally, Dark Horse will create all-new Airbender stories that will be published as digest-style original graphic novels—conveniently sized paperback collections—in early 2012. Picking up where the season three finale left off, this new series will follow the further adventures of Aang and his friends, as they help to rebuild a world torn apart by 100 years of war.

“We had a great experience collaborating with Dark Horse on Avatar: The Last Airbender — The Art of the Animated Series,” series co-creator Michael Dante DiMartino said. “We are excited to work closely with them once again to bring the further adventures of Avatar Aang and his friends to the comic world.”

Since 1986, Dark Horse Comics has proven to be a solid example of how integrity and innovation can help broaden a unique storytelling medium and establish a small, homegrown company as an industry giant. The company is known for the progressive and creator friendly atmosphere it provides for writers and artists. In addition to publishing comics from top talent like Frank Miller, Mike Mignola, Neil Gaiman, Gerard Way and comics legend Will Eisner, Dark Horse has developed such successful characters as The Mask, Timecop, and SpyBoy. Additionally, their highly successful line of comics and products based on popular properties includes Star Wars, Indiana Jones, Buffy the Vampire Slayer, Aliens, Conan, Emily the Strange, Tim Burton, Trigun, Serenity and Domo. Today Dark Horse Comics is the largest independent comic-book publisher in the U.S. and is recognized as one of the world’s leading publisher of licensed comics material.

Nickelodeon, now in its 31st year, is the number-one entertainment brand for kids. It has built a diverse, global business by putting kids first in everything it does. The company includes television programming and production in the United States and around the world, plus consumer products, online, recreation, books and feature films. Nickelodeon’s U.S. television network is seen in more than 100 million households and has been the number-one-rated basic cable network for 16 consecutive years. For more information or artwork, visit http://www.nickpress.com. Nickelodeon and all related titles, characters and logos are trademarks of Viacom Inc. (NYSE: VIA, VIA.B).