Fans of the original Nickelodeon animated series ought to be thrilled as the series of digest is expected to pick up where the show left off. 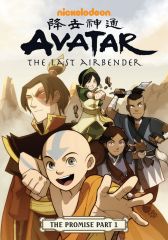 Dark Horse comics has released details for their upcoming trade paper back “Avatar: The Last Airbender Volume 1 – The Promise” Part 1 TPB. Fans of the original Nickelodeon animated series ought to be thrilled as the series of digest is expected to pick up where the show left off.

From the description on Dark Horse:

This series of digests rejoins Aang and friends for exciting new adventures, beginning with a faceoff against the Fire Nation that threatens to throw the world into another war, testing all of Aang’s powers and ingenuity!

* The continuation of Airbender and the link to its upcoming sequel, Legend of Korra!

The story will be written by Gene Yang, author of the National Book Award-nominated “American Born Chinese.” With art by Gurihiru, the Japanese team behind many of the stories in “Avatar: The Last Airbender – The Lost Adventures.”

Original show creator Mike DiMartino and Bryan Konietzko are also involved. According to Yang, he communicates back and forth with them to better understand characterization and how to approach the story.

“I e-mail them, like, all the time, and they totally e-mail me back. It’s awesome. I also get to see how they approach a story, how they think through characterization, how they build tension. I get to steal a little of their mojo. I’ve learned so much,” says Yang on his website.