A rumor has been buzzing on forums this week about the possibility of the canceled “Wonder Woman” pilot seeing a release on Netflix.

A rumor has been buzzing on popular DC fan forums this week about the possibility of David E. Kelly’s canceled and much scrutinized new “Wonder Woman” pilot seeing a possible release on Netflix.

From the DC Universe/Warner Brothers’ fan forum, user robolivera noted how he had discovered the listing of the reimagined Adrianne Palicki’s “Wonder Woman” pilot on Netflix:

I was looking for Captain America on Netflix to see what it said about a r.elease date even though it’s not even out in the theaters yet. It has a picture of him with “NR” (Not Released) next to it.

Then I searched for Lynda’s WW… It says NR too. BUT it has Adrianne Palicki’s Wonder Woman on there as well with NR next to it!!

Likewise, GloriaofGrayskull from the mattycollector forum noticed something similar:

Today I searched for wonder woman on netflix site and it seems like they are going to release the new pilot in dvd I added it to my queve/list of dvds everyone add it so that there is high demand for it!

Take this news for what it is, wild Internet speculation. But from what we know, the pilot was never completely finished. And Netflix is notorious for listing shows and movies in advance in order to gauge interest. This of course, doesn’t mean that the show won’t ever be released as is or gets picked up by another network or see an eventual release on Netflix. The point is, don’t expect the new “Wonder Woman” pilot/series to be actually available anytime soon.

In the meantime, here are some screens from the unaired pilot of Palicki looking very Wonder Womany in the classic blue star-spangled shorts. 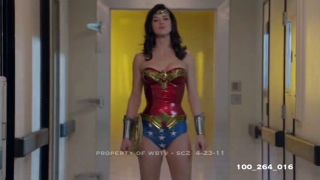